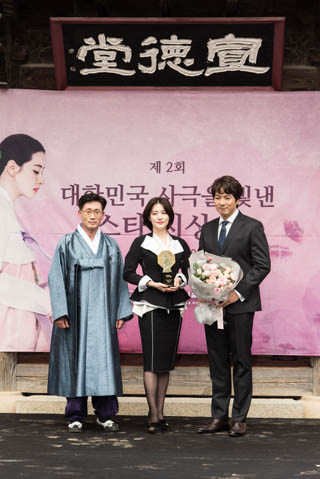 Actress Lee Young-ae was honored for her contributions by the Period Drama Festival, organized by Korean Folk Village.

The actress appeared at the folk village in Yongin, Gyeonggi, on Saturday to receive the award. The folk village said it chose to recognize Lee for her hard work in the 2003 hit drama series “Dae Jang Geum,” set in the Joseon Dynasty (1392-1910).

Lee is currently working on a new historical drama series “Saimdang: Her Story,” the first project for the actress in over a decade.

“I’m currently shooting my new drama series here, and this is my first drama since ‘Dae Jang Geum,’” Lee said.

“This [new] drama tells the story of Shin Saimdang, who is revered by many people.

“You can expect a lot from it,” she added after receiving her trophy from actor Song Il-kook, the award ceremony’s host.

Shin, who graces the 50,000 won bank-note, was a calligraphist, painter and mother of the Joseon scholar Yulgok. She is one of the best known female Korean historical figures of her time.

In the drama, Lee plays Jang-geum, who begins her career as a cook in the palace but later becomes the king’s first female physician. The drama is also known as “Jewel in the Palace.”

“Dae Jang Geum” earned nearly 50 percent viewership in Korea and it is still one of the highest rated Korean drama series.

It is also credited for spreading Korean programming overseas. It earned nearly 90 percent viewership in Iran when it was broadcast in 2007.

Although “Dae Jang Geum” brought Lee global fame, the 44-year-old actress has been a stay-at-home mother since 2011, when she gave birth to twins.