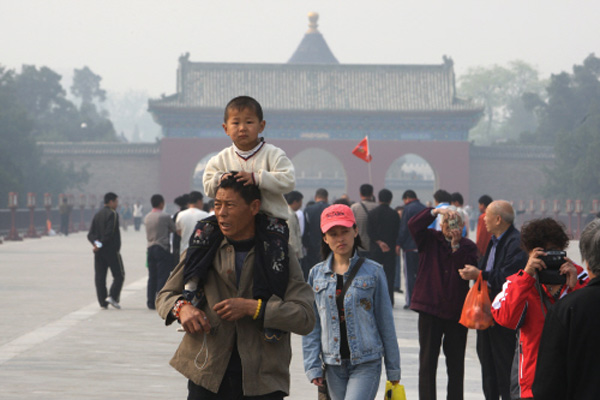 A family strolls in a park in Beijing. Under the decades-long “one-child” policy, Chinese people’s preference for boys is unrivaled. [Kim Sang-seon]

When Chinese leaders convene this week for a four-day meeting on the future of the country’s economy, the biggest news might have to do with babies. According to reports in Chinese media, the government may be ready to relax the notorious “one-child” policy, in existence since the late 1970s, and allow Chinese parents to have two kids.

This might seem like a rare victory for human rights in a country where reproductive freedoms have long been restricted, and it is. But the government has a more practical outcome in mind. China’s population of working-age adults started shrinking in 2012, and by 2050 the country will be home to fewer than 1.6 workers for every retiree, according to a 2013 Paulson Institute report, comparable to aging, slow-growth countries like Japan and Singapore. In response, the regime is hoping to spark a baby boom.

Unfortunately, by this point, even a two-child policy may be too little, too late. Most Chinese outside the big cities can already have two, and sometimes more, children. Meanwhile, a recent, limited opening in several cities failed to turn up many urban couples interested in having a second child.

The reasons aren’t unique to China: As societies become wealthier and concentrate in cities, couples choose to have fewer kids. A 2012 study found that from 2000-05, urbanization accounted for a net decline in fertility in all but three of China’s provinces. The government could try enforcing maternity-leave policies better and providing more generous childcare subsidies. But such policies haven’t really succeeded in Singapore or Japan, and there’s little reason to think that they’d work any better in China.

More drastic solutions are needed. Step one would be to scrap population control policies altogether. Though total fertility in China is in long-term decline, lifting the cap on births entirely might at least encourage rural parents to produce more kids. What China really needs to do, though, is the same thing Japan’s struggled with for so long: import labor.

If bringing immigrants into the world’s most populous country sounds crazy, it’s not. China is already home to large immigrant communities, including several hundred thousand Africans (mostly traders) in Guangzhou, approximately 30,000 to 40,000 Arab traders in the trading hub of Yiwu, and hundreds of thousands of Americans, Japanese and Europeans - many of whom work illegally as professionals and creatives - across the country.

More pertinent perhaps are the increasingly large communities of Southeast Asian laborers who have begun working in southern Chinese factories as the supply of migrants from the countryside dries up. No reliable estimate of their numbers exists. But according to an August investigative report by Reuters, there are “at least 30,000” illegal workers in Dongguan, one of China’s best-known manufacturing towns, most of whom hail from Southeast Asia. Chinese officials are reluctant to admit to the scale of the influx (likely because of the corruption involved in bringing workers over the border), but state media concedes the number of illegal migrants has grown in recent years.

The question is how to formalize and build upon a trend that’s already begun. In recent years, China has opened its doors to high-skilled immigrants. But like most East Asian countries, China isn’t a diverse place, and citizens and leaders alike remain suspicious of outsiders. Though a naturalization process exists, it’s rarely used except for cases of marriage or individuals perceived to have made major contributions to Chinese society.

The chances of those rules being changed are slim. But China could take other less dramatic steps, starting with a temporary guest worker program targeting factory workers. In advance of the 2020 Olympics, Japan is trying something similar, allowing skilled construction workers into the country temporarily. China could target the lower end of the labor spectrum.

Assuming that the government can establish an enforceable baseline standard for wages and conditions - a big if - a formal work visa program might actually make China the destination of choice for Southeast Asia’s massive population of migrant laborers, most of whom work illegally in places such as Malaysia and Thailand. That would be a big advantage - Chinese companies would have their pick of labor - as Chinese factories increasingly compete against those in Southeast Asia. As factories grow more automated and the need for unskilled labor declines, the program could be expanded to service workers, from waiters to nurses.

Like any largely homogenous country, China will struggle with the idea of accepting a large influx of foreigners. But the relative tolerance with which expatriates and foreign workers appear to be treated currently suggests at least some degree of formal immigration is possible. What the government needs to do is begin explaining to citizens why such a move might become necessary. That kind of education and outreach could one day be as important to China’s future as abolishing the hated one-child policy.


The author is an American writer based in Asia, where he covers politics, culture, business and junk.