Creditors give ultimatum to troubled DSME

Creditors give ultimatum to troubled DSME 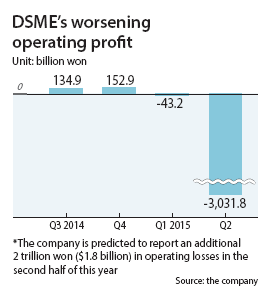 The restructuring process for the financially troubled Daewoo Shipbuilding & Marine Engineering (DSME) has come to a critical crossroads.

The creditors and financial authorities that promised financial support to the company declared Monday that they might not release the funds - or could even file for court receivership - if the shipbuilder’s labor union doesn’t comply with creditors’ demands by midnight Tuesday.

The decision was not announced as of press time Monday.

Executives in charge of DSME’s restructuring process dispatched from the creditors, led by the state-run Korea Development Bank (KDB), told the shipbuilders’ executives on Friday to get an agreement from the labor union promising to follow the creditors’ demands.

The creditors said earlier this month they will give 4 trillion won ($3.5 billion) to DSME to help it normalize, but have now changed their stance, saying the support will be given only when the company shows reasonable restructuring plans. The creditors added that the labor union must agree to details like the salary freeze, as well as promise not to strike against the management’s restructuring plans until the company is back on its feet.

“The demands made by the creditors aren’t negotiable and should be accepted as soon as possible since DSME is in a very serious financial situation,” said a spokesman of KDB.

Sources in the financial institutions said the deadline reflects the hardening attitudes of the government and financial authorities toward financially troubled businesses, which are being pushed to develop their own plans for survival.

In a meeting held on Thursday attended by creditors, financial authorities and government officials, Finance Minister Choi Kyung-hwan reportedly said, “The company definitely needs its own survival plans even if it goes into court receivership.”

The creditors’ decision came out the next day.

The hard-line stances of the government and financial authorities are worrying the banks that have invested trillions of won in the shipbuilder, including the state-run Export-Import Bank of Korea and NH Nonghyup, because the company currently has no way of surviving without external help. The DSME’s debt-to-equity ratio was 776 percent in the first half, but the figure will hit 4,000 percent if the third quarter’s estimated losses of 1.3 trillion won are fully reflected in its balance sheet. The company is predicted to report about 5 trillion won in losses this year, according to industry data.

The company is predicted to face serious financial hardship starting next month as it first has to pay off 300 billion won in corporate bonds by the end of November. The company even had to sell 2,343,870 shares - worth about 14.7 billion won - earlier in the month, after it failed to give the 40 billion won in the Chuseok and vacation bonuses it was supposed to pay employees on Sept. 25.

The company is currently trying hard to persuade the labor union to accept the creditors’ demands, since the 4 trillion won would give it some urgently needed breathing room. Executives of DSME including CEO Jung Sung-leep met the labor union’s leadership at the Okpo dockyard in South Gyeongsang on Friday, and met them again on Monday. Still, the labor union maintains it can’t accept the demands since they infringes on the three primary labor rights guaranteed by law, including the right to launch a strike.

“We have been consistently saying we will try our best on anything if that helps to put the company back on track, but it doesn’t mean that we can be forced to sacrifice ourselves,” said Hyun Si-han, head of the labor union, on Friday.

But industry insiders say the unionized workers’s likelihood of accepting the demands is high since they already recognize how serious the company’s financial condition is.

“Workers know that the company doesn’t even have enough funds to build ships or even buy tools and materials,” said a source in the company who asked for anonymity.

Representatives of the labor union held a meeting regarding the issue on Monday evening, but the final decision wasn’t announced as of press time.