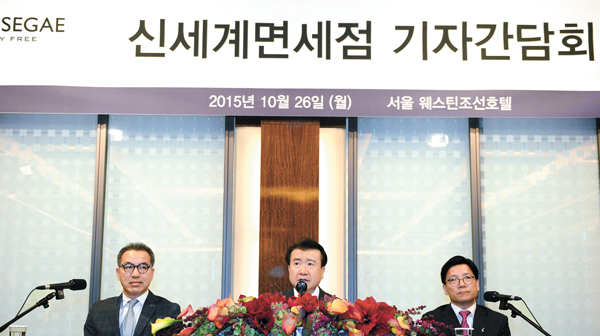 CEO Sung Young-mok of Shinsegae DF, center, demonstrates the operator’s plan for how it will run a new duty-free ship if Shinsegae earns a license. [NEWSIS]

Operators competing for control of lucrative duty-free shops revealed their business plans yesterday, as the announcement on the winner of the licenses is expected to be announced within weeks.

Of the four duty-free shop licenses up for grabs, Lotte Duty Free runs two in Sogong-dong, central Seoul, and Jamsil, southern Seoul, while SK Networks operates one in Gwangjin District, eastern Seoul. Shinsegae has its store in the Paradise Hotel in Busan.

All of the three existing operators have submitted applications to hold on to their profitable licenses.

Shinsegae DF, a Shinsegae unit in charge of running duty-free business, said on Monday that it will invest a total of 270 billion won ($240 million) through 2020.

The company said the investment will mainly go towards attracting tourists and forging partnerships with local merchants - particularly those working at Namdaemun Market in central Seoul.

The traditional market is in the vicinity of Shinsegae Department Store, where the operator hopes to house a new duty-free shop if it wins approval from the Korea Customs Service.

Doosan Group and Shinsegae DF are trying to capture the license in Seoul. Both turned in business plans for three locations.

To cooperate with local merchants, Shinsegae said it will designate a floor of its duty-free shop to sell locally produced products.

“Through the support, [Shinsegae] will contribute to helping the country achieve more tourists - twice the current figure by 2020,” said Sung Young-mok, head of Shinsegae DF.

The planned duty-free shop will take up floors eight to 14 of the new building at Shinsegae Department Store on top of seven floors of the MESA shopping mall, which is owned by the retail group.

Both Doosan and Lotte Group echoed similar plans with slight differences in detail.

Doosan Group, a machinery and construction conglomerate, pledged to turn Dongdaemun into a major shopping attraction.

The conglomerate is promoting its Doosan Tower mall in Dongdaemun as its duty-free venue, saying that the district is a prime shopping destination for tourists.

The group plans to partner with nearby shopping complexes to establish a K-pop-themed hall while helping aspiring fashion designers and smaller retailers who are currently working in the area.