Number of new businesses up

Number of new businesses up 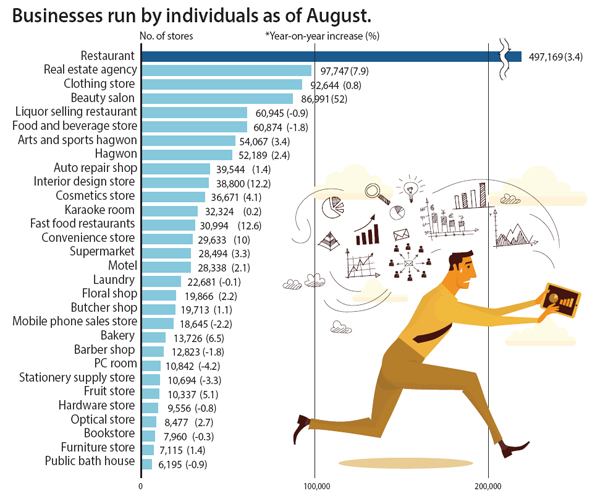 As the struggling economy has made job opportunities fewer and further in between for the nation’s unemployed, an increasing number are responding by opening their own businesses.

According to a study by the National Tax Service released on Wednesday, the number of people who have their own businesses increased 5.6 percent as of the end of August, compared with the same period a year ago. Last year, there were 6.26 million people running their own businesses, which increased this year to 6.61 million. The sharpest growth was seen in individuals at or near retirement age, at 12.4 percent. The second-fastest growth was seen in individuals under 30, at 8 percent.

The largest group who owned their own businesses were people between age 50 and 60.

Men tended to own their own business more commonly than women, at 63 percent of the total. But the number of female entrepreneurs grew at a faster pace, climbing 6.7 percent compared to the men’s 4.9 percent.

This year, food-related businesses such as fast food restaurants and bakeries grew. The number of people who opened up a fast food shop selling either chicken, pizza or hamburgers grew 12.6 percent, while those who opened a bakery grew 6.5 percent. Other general restaurants selling Korean, Chinese or Japanese food saw a 3.4 percent increase. However, restaurants that focus on alcohol saw a slight decrease of 0.9 percent. 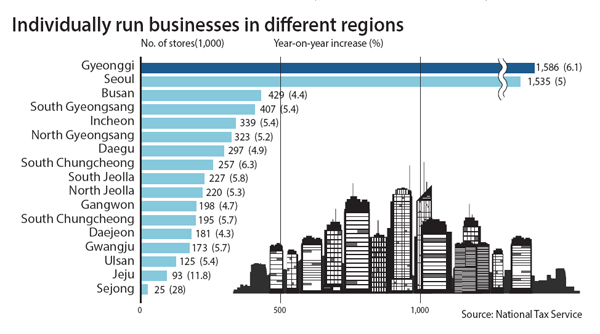 In service-related businesses, real estate agencies saw a sharp increase of 7.9 percent, while beauty salons enjoyed a 5.2 percent increase. In contrast, the PC rooms that were ubiquitous in the late 1990s thanks to online gaming declined 4.2 percent.

By region, the greater Seoul area had the most individually run businesses. Gyeonggi had the largest number of such business owners at nearly 1.6 million, accounting for 24 percent of the total, followed by Seoul with 1.54 million or 23.2 percent, and Busan with 429,000 or 6.5 percent.