SKT shows a 5G future at its center in Bundang

SKT shows a 5G future at its center in Bundang 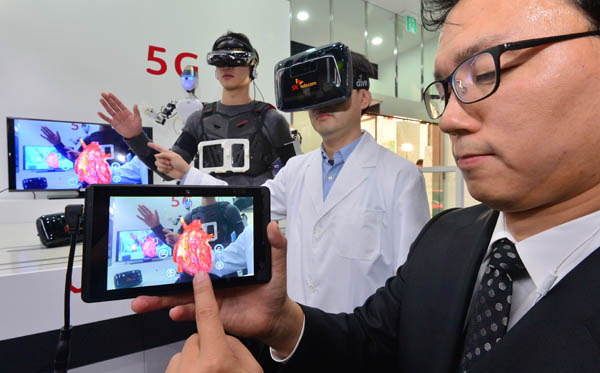 SK Telecom demonstrates a piece of remote augmented reality technology at the 5G Innovation Center in Bundang, Gyeonggi, on Thursday. The center opened up while showing different wireless technologies, including a humanoid. [NEWSIS]

The 5G Global Innovation Center in Bundang, Gyeonggi, opened on Thursday with a range of devices and technology made possible by 5G and partnerships with Nokia, Ericsson and Samsung Electronics.

Leading telecommunication companies both at home and abroad are vying to achieve standardized technology for 5G networks before they are fully commercialized in 2020.

The 5G technology will bring many futuristic devices into reality, since its transmission speed for data will be significantly accelerated by at least tenfold, said Choi Jin-sung, chief technology officer of SK Telecom, at the opening event.

“What we’ve just heard of now - such as virtual reality and augmented reality technologies - will become part of our life when the 5G era comes along,” he said.

“But the more important aspect is the value it will bring to people’s lives.”

The telecom operator demonstrated a peak data transmission rate of 19.1 gigabits per second in cooperation with Nokia, the highest rate to date. In theory, existing 4G networks can reach 1 gigabit per second maximum.

The enhanced data transmission speed means it will take less than one second to download a 2-gigabyte movie.

A huge multi-touch tabletop connected via 5G plays a starring role at the center, attracting a throng of reporters.

When a person touches the surface with five fingers, five menus appear. The menus include an Internet web browser and popular applications such as Evernote.

The futuristic object is the brainchild of a project called Beyond Surface, in which SK Telecom and startup NEMO-UX collaborated.

The company said people can remotely control the robot.

During a demonstration, the robot mirrored the movements of a person wearing an exoskeleton suit, functions that rely on an advanced 5G network.

“The robot can correspond with the movement of humans because the 5G network basically enables the robot to quickly respond,” said Jeon Jin-soo of SK Telecom, who explained the technology.