Pipeline is promised to most parched province

Pipeline is promised to most parched province 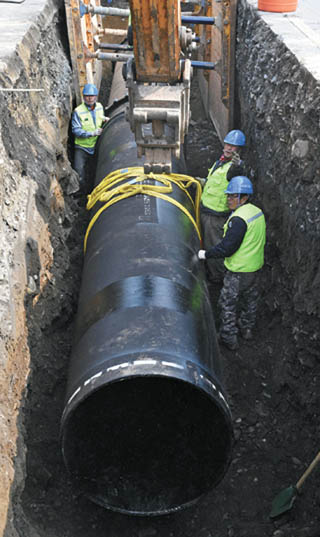 Workers in Buyeo County, South Chungcheong, build a pipeline on Thursday as part of a multibillion won irrigation project launched to tackle a drought that has become the country’s worst in history. [NEWSIS]

A 21-kilometer (13-mile) pipeline linking the Geum River and Boryeong Dam will provide 64 percent of what the dam used to provide to eight cities and counties in the province, authorities said. Water supplies to these areas have recently plunged to 23 percent of the normal level. The project will be completed by February 2016.

Thursday’s announcement came amid the country’s worst drought on record. South Chungcheong was hit particularly hard, with total precipitation this year at 564.9 millimeters (22.2 inches), 44.9 percent of the usual amount.

The region hasn’t seen adequate rainfall since 74 millimeters of precipitation that fell on Oct. 21, 2014.

During a visit to Yedang Reservoir in Boryeong, South Chungcheong, Saenuri Chairman Kim Moo-sung blamed critics of the four-rivers restoration project, lashing out on their endeavors to hamper progress of the national initiative supported by the former administration. Pushed forward by the Lee Myung-bak government to stave off water shortage, the restoration project targeted the Han, Nakdong, Geum and Yeongsan rivers and used some 22 trillion won of state funds from 2008 to 2013.

Although the project managed to achieve some of its intended goals, a number of undesirable side effects have provided fodder to the main opposition New Politics Alliance for Democracy (NPAD) to criticize the project for being wasteful and ineffective.

The Saenuri Party says critics kept the massive project from fulfilling its goals.

“There’s no place for politics in dealing with droughts,” Kim told South Chungcheong Gov. Ahn Hee-jung, who accompanied him on a tour with a group of reporters.

Ahn belongs to the NPAD.

Without directly placing the NPAD at fault, Kim said that both parties must overcome political strife on environmental issues.

Kim highlighted the urgency of irrigation and said that a follow-up strategy for the four-rivers project would ease water shortages.

There are already some 1.166 billion cubic meters (39.4 billion cubic feet) of water preserved across the 16 barrages, a type of dam, built for irrigation as part of the four-rivers project. That’s enough water to fill the Boryeong Dam, which has a capacity to hold 116.9 million cubic meters and supplies water to eight cities and counties in South Chungcheong, 10 times over.

Kim argued that linking these barrages and reservoirs would help the province tackle drought.