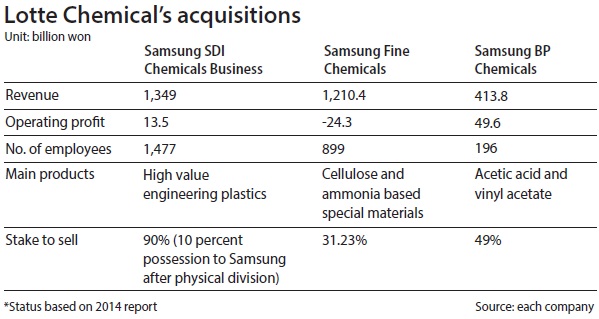 Lotte Group agreed to buy sizable stakes in Samsung’s petrochemical units for a combined 2.8 trillion won ($2.5 billion) on Friday in a bid to extend its business beyond retail and hotels, while Samsung Group narrows its focus to technology and finance.

The biggest deal in Korea’s chemical industry and in Lotte Group’s history came as the two conglomerates seek to either reorient or expand their areas of focus.

Lotte Group cited business diversification as the primary reason for the acquisitions, though the market was cautious about Lotte’s valuations of the Samsung units. Shares of Lotte Chemical plunged by more than 10 percent on Friday. 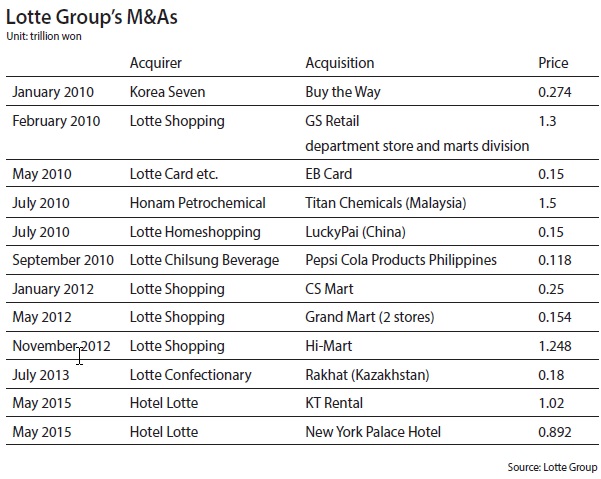 “Lotte Chemical, which specializes in basic petrochemical materials and synthetic fibers, has been on the lookout to include future-oriented chemical businesses and products to create synergies with existing products,” the group said. When the deal is completed in the first half of 2016, the Lotte affiliate is expected to boost its competitiveness in plastic materials such as polycarbonate, acrylonitrile butadiene styrene and polystyrene, in which Samsung’s chemical units are strong.

While the benefits of diversification for Lotte were widely appreciated, the high cost of the acquisitions prompted some analysts to take a cautious view.

“Lotte Chemical should be investing some 4 trillion won through 2018,” said Lee Eung-joo, an analyst at Shinhan Investment. “But if the company is spending 3 trillion won for the acquisitions on top of that investment, it’s going to be under tremendous financial pressure.”

Lotte plans to invest an estimated 2.9 trillion won to build an ethane plant in Louisiana, in a bid to produce a million tons of ethylene.

The project is being done in partnership with the Axiall Corporation of the United States and Japan’s Mitsubishi Group. Lotte Chemical agreed to hold 90 percent, and Axiall will have 10 percent of the plant.

Hana Financial Investment estimated the value of Samsung SDI’s chemical spinoff at up to 1.1 trillion won and Samsung Fine Chemicals at 340 billion won.

Even if premiums related to management rights are taken into consideration, the maximum price for the acquisition should be 2 trillion won, according to a report released by the finance group on Friday.

Skeptics said that the plastics made by those companies don’t offer much promise in the future. Lotte said the acquisitions were the idea of chairman Shin Dong-bin, who intends to turn the group into a retail and petrochemical giant.

“The deal was led by Chairman Shin Dong-bin, who showed consistent attention to the petrochemical business,” Lotte Group said.

It added that it predicts Lotte Chemical’s total annual sales will grow to 20 trillion won from 14.9 trillion won last year. The announcement may help the chairman strengthen his control of Lotte Group after a bitter family dispute.

On Samsung’s side, the offloading is also linked to the scion of the Samsung Group family, although the affiliates involved refrained from saying so directly.

Samsung Group is going through a major restructuring as Jay Y. Lee gradually takes over from his hospitalized father, Chairman Lee Kun-hee.

The group sold businesses that it deemed not profitable or essential to its future.

In April, Samsung sold stakes in four chemical and defense firms, including Samsung Techwin for 1.9 trillion won to affiliates of the Hanwha Group. Analysts said the sales were intended to raise money to pay inheritance taxes that could amount to approximately 6 trillion won.

Samsung SDI said that proceeds from the sale of its chemicals unit will be used to strengthen its electrical car battery business, a sector that the company is betting big on.

“The company will put all resources to develop and invest in the battery business in order to achieve a dominant position in the global market,” Samsung SDI said.

As for the chemical business, it acknowledged that the company found it hard to remain cost-competitive and expand investment.

The factory began operating in September and will cover battery supplies for partners that include BMW and Chinese automaker partners Yutong and Foton.

The sheer size and demand of the Chinese market led Samsung to seek a base in the country, the company explained.

The company announced this month that it will invest an additional $600 million by 2020 in a bid to boost production and fulfill a sales target of $1 billion that year.