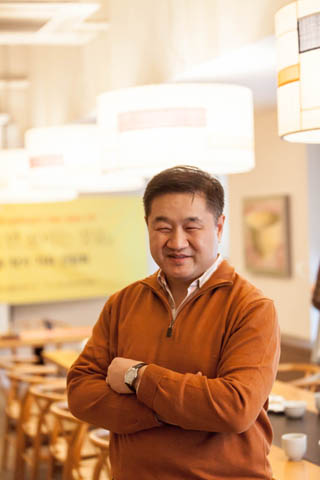 Shin Soon-kyu, 48, is a chartered financial analyst who currently works as a senior vice president at Brown Brothers Harriman & Company, the oldest private bank in the United States.

He is also blind.

The financial professional recently published a book in Korean, “Things You Can See If You Close Your Eyes,” and visited Seoul to attend a media conference on Tuesday near Gwanghwamun.

“I didn’t want to explain how I succeeded,” he said. “I wrote the book over three years using a braille computer because I wanted to highlight some emotional moments in my life that only I could experience because I’m different from others.”

He compared his life to a car’s navigation system. “There are two types of car navigation systems. One says, ‘You took the wrong way,’ while the other says, ‘We’ll try a different way,’” Shin added.

“My life was like the latter. Whenever I was on the wrong path, I re-evaluated my life. Fortunately, I like my current job and it really suits me.”

He started to research his future after he completely lost his sight due to glaucoma and retinal ablation, which lead to irreversible, progressive vision loss at age 9.

His mother didn’t want his opportunities to be limited, so Shin learned how to play the piano and went to the United States at the age of 15 upon the invitation of the Overbrook School for the Blind in Pennsylvania.

He also attended high school in the United States, and went on to study psychology at Harvard University and business administration and histology at the Massachusetts Institute of Technology. Then he began working at J.P. Morgan.

“Even though I dreamed about becoming a scholar at first, I realized it didn’t suit me. I changed my mind and decided to become the first successful blind analyst after realizing there are only few of them,” he said.

Working as a blind analyst, Shin continued, is not as difficult as people might think, as analysts need to follow a company’s history rather than focusing solely on the numbers.

“Many people fail to really investigate due to such an overflow of information,” he said. “I think a blind analyst is better at examining important content without having mixed feelings about each piece of information.”

His life was similar to an analyst’s work, he added; he could see what was important because he literally could not see.

In Shin’s book, he touches upon his upbringing and values, and discusses the ability to see, the importance of dreaming, work and his wife and two children.

When asked what he remembers from the time before he lost his sight, he said, “I had more than 20 operations. Whenever I woke up from anaesthesia, the first thing I saw was my mother’s face. Even though I’ve always remembered her face, I’m not sure now if I remember it correctly.”