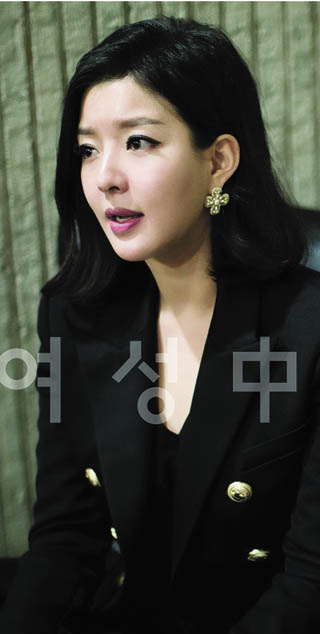 Kim Mi-na says she lives not on her husband’s salary but on monthly rent from a building registered in her name. [WOMEN’S JOONGANG MAGAZINE]

Kim Mi-na, an online blogger who writes under the pseudonym dodomom, denied in the November 2015 issue of Women’s JoongAng Magazine that she had engaged in an extra-marital affair with lawyer and entertainer Kang Yong-suk.

The scandal erupted after Kim’s husband filed an adultery lawsuit against Kang in January, alleging that the two had been together in Hong Kong last year.

Although Kang denied the allegations, the tabloid Dispatch published photos of Kim and Kang in Hong Kong, as well as excerpts of their chats on KakaoTalk, adding to speculation that the two were having an extramarital relationship.

The interview with Women’s JoongAng Magazine was the first time Kim revealed her face and real name.

“Even though I was hesitant to give an interview, I finally decided to come out with the truth because people thought I was hiding, and hiding myself seemed like acknowledging adultery,” she said.

“I was married for 10 years, and I have one daughter and one son. I wanted to explain the relationship because my two children may misunderstand the case if it ends up being a scandal.”

While Kang explained in an interview with Women’s JoongAng Magazine in October that Kim was just a drinking buddy who happened to be female, Kim said that Kang was just a male friend, whom she met when she belonged to a public relations agency as a former Miss Korea.

“Although he is a magnanimous and charming person, his appearance and everything else is not my style,” she said.

She admitted to the KakaoTalk chats and that she had met Kang in Hong Kong, adding that it was her fault that the relationship had become misconstrued.

“I denied my relationship with him at first because it may have seemed like I was conceding the scandal if I clarified right away that he is a close friend and that I met him in Hong Kong,” she added.

After the news broke about a possible affair, Kim even asked Kang to dinner, saying she saw no reason to sever contact just because the two were not an item.

Kim and her husband, the manager of the Korean national ski team and the chief of the PyeongChang Organizing Committee for the 2018 Olympic Winter Games, are in the process of filing for divorce.

She clarified that trouble between them - not the scandal with Kang - was the reason for their divorce.

“I feel guilty for hurting my children,” Kim said. “But at the same time, I think it has made me mentally stronger.”

Kim plans to reopen her blog soon and start her own restaurant.