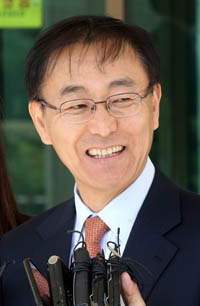 The Daegu native was nominated to replace Prosecutor General Kim Jin-tae, whose term comes to an end on Dec. 1.

He added that Kim “holds firm convictions on law and order and constitutionalism, and is qualified to head the prosecution under a fair and rational leadership to root out societal evils.”

After graduating from Cheonggu High School in Daegu, Kim headed to the law college at Seoul National University and underwent training at the Judicial Research and Training Institute. He spent three years as a judge before becoming a prosecutor.

During his time as chief of the Suwon District Prosecutors’ Office, Kim headed a high-profile investigation into Lee Seok-ki, a lawmaker of the Unified Progressive Party, for allegedly plotting a rebellion against the Korean government by forming an underground “Revolution Organization” in August 2013.

At the end of that year, he was promoted to chief of the Seoul Central District Prosecutors’ Office. He became deputy prosecutor general in February.

A nine-member committee under the Ministry of Justice reviewed candidate nominations for a week earlier this month.

Kim will undergo a National Assembly hearing before he can take the post.

The main opposition party complained that once more, a key position was being filled by an official from the so-called TK area (Daegu and North Gyeongsang), considered a stronghold of the ruling Saenuri Party and President Park. The TK nickname dates back to when Daegu was transliterated as Taegu and Gyeongsang as Kyongsang.

“Are all the key prosecutors’ posts to be filled with people from the TK region, or are there no prosecutors in places outside of the TK area?”

He pointed out that top posts including that of the National Tax Service and Fair Trade Commission were from Daegu and North Gyeongsang.