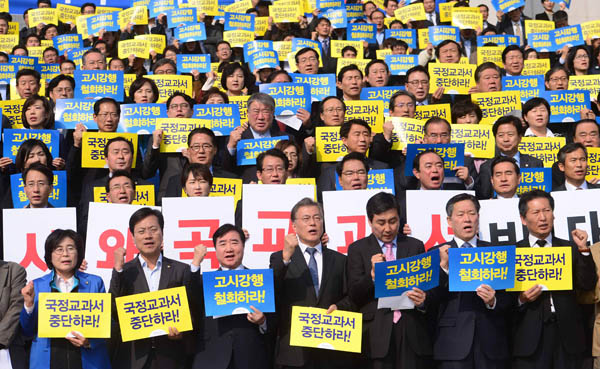 Opposition lawmakers, including New Politics Alliance for Democracy Chairman Moon Jae-in, fourth from left, protest the Park Geun-hye administration’s announcement that the government will take over the writing of history textbooks on Tuesday in front of the National Assembly in Yeouido, western Seoul. [NEWSIS]

The Park Geun-hye administration went ahead on Tuesday with a highly contentious taking over of the writing of history textbooks, declaring the current textbook authentication system a failure.

“We must correct biased history textbooks in order to allow students to have clear national and historical identities and proper historical views,” Prime Minister Hwang Kyo-ahn said in a statement to the nation. The speech Tuesday morning informed the public that the government has taken the final step to introduce state-authored history textbooks to middle and high schools by 2017.

The Ministry of Education announced on Oct. 15, 2015, that it will take administrative steps to change the regulations governing history textbooks. At the time, the ministry said it would listen to public opinion about the plan before finalizing it.

Following Hwang’s speech, the government published the change in the official government gazette as the final administrative step.

State control over Korean history textbooks was first introduced under the military rule of Park Chung Hee, the late father of the current president, in 1974 and ended in 2010. The current system, in which schools choose from a range of textbooks approved by the Ministry of Education, will have only lasted for seven years once the state-published materials are introduced in 2017.

Under the current system, eight kinds of history textbooks are available. Seven of them were considered liberal, while one was considered conservative. President Park expressed concerns about pro-North Korea biases in the textbooks shortly after she took office in 2013.

But the government and the ruling Saenuri Party decision to introduce state-penned materials into classrooms met strong resistance from liberal politicians, teachers and historians.

“Most people agreed that current history textbooks contain many problems. They said these books can be corrected by meticulously applying the endorsement process,” Hwang said. “In reality, the current system doesn’t allow us to resolve the issues.” 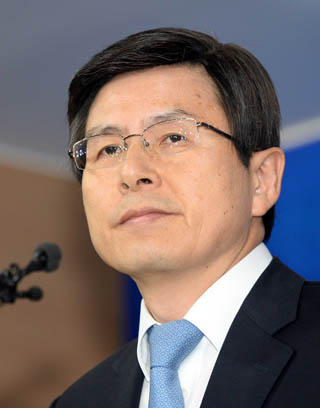 He said it was a mere technicality that there were eight textbooks available for schools to choose from because seven of them are nearly identical. “They don’t have diversity, and they are actually the same biased textbook,” Hwang said. He said that 20 schools that selected the conservative Kyohak Publishing textbook in 2014 ended up withdrawing their decision after threats by leftists, depriving the students of the right to diverse views.

“As of now, 99.9 percent of high schools selected controversial textbooks,” he said. “Although they claimed to promote diversity, they, in fact, lost it.”

Hwang gave a presentation of examples from the current textbooks that the government sees as problematic.

The current textbooks give the wrong impression that both South and North Korea were responsible for the 1950-53 Korean War, Hwang said.

He complained that current textbooks downplay the significance of the founding of the Republic of Korea, while giving the impression that the North is a legitimate state, an example of liberal bias.

Hwang concluded his speech saying the government decided to introduce the new texts now because Korean history will become a mandatory subject in the college admission exam starting next year.

“We should no longer teach our children using distorted and biased history textbooks,” he said.

“We must create proper textbooks that are based on objective historical facts and faithful to constitutional values.”

The prime minister also appealed to the nation to trust the Park administration’s integrity in relation to history. “Some are concerned that the state-penned textbooks will whitewash the history of collaborators with the Japanese colonial government and the dictatorship,” Hwang said. 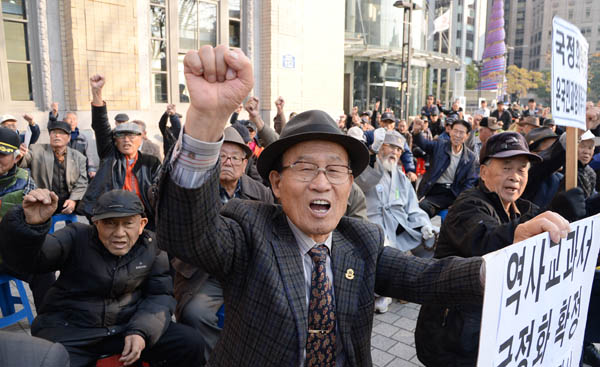 Conservative groups, including an association of defectors, celebrate the government’s announcement on Tuesday that it will write history books to end leftist biases at Gwanghwamun in central Seoul. [NEWSIS]

“But that will never happen,” he continued. “A mature Korean society will not tolerate it. The government will never allow attempts to distort history.”

According to the Education Ministry, the state-run National Institute of Korean History will select authors by the middle of this month, and drafts will be completed by the end of November 2016.

In addition to an internal review, the public will also have access to the drafts to propose revisions in December 2016. The ministry will print the final materials and distribute them to schools in March 2017.

Liberal politicians condemned the Park administration for the plan. The main opposition New Politics Alliance for Democracy (NPAD) held a press conference and a rally at the National Assembly to denounce it.

Their protest paralyzed legislative activities, including a budget deliberation, a confirmation hearing for the new maritime minister and a voting session on Tuesday.

“The government has declared war against the people instead of paying attention to the people’s lives,” Moon Jae-in, chairman of the NPAD, said.

“From the beginning, textbooks were not something in which politics should have been allowed to interfere with,” he said.

“History textbooks are not a subject of the government’s war against the people. They are a matter of learning, education and democracy.”

It remains to be seen if the government will be able to recruit authors easily.

While the government said it will select 20 to 40 authors in various fields including history, constitutional law and economics, most historians and humanities professors of 20 universities, including Seoul National University, are refusing to participate.

The National Institute of Korean History is scheduled to announce today the standards for selecting authors and the curriculum for the new textbooks.

“Now we will have one textbook that no one will be satisfied with,” said Park Jong-ki, a professor of history at Kookmin University. “Instead of uniting the people, it is dividing our society.”

The modern history of democratization and industrialization are also expected to be contentious subjects. The opposition claims the new textbooks will likely glorify Korea’s dictatorships and the role of its conglomerates.