Only in their 20s and already deeply in debt

Only in their 20s and already deeply in debt 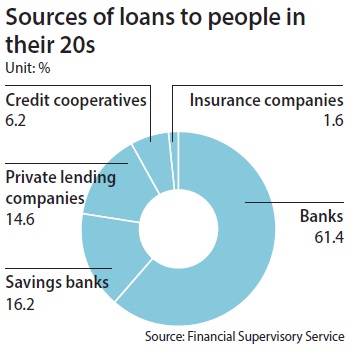 Mr. Kim, 28, was unemployed earlier this year. He was embarrassed to ask his parents for money, so he went to a savings bank.

Getting a loan from a savings bank, which in Korea are more like consumer finance companies, was simple. The bank asked for some documents to check Kim’s credit rating. If the process was easy, the terms weren’t: Kim had to pay 120,000 won ($100) per month in interest from the start.

“I ended up visiting the Credit Counseling and Recovery Service, [a nonprofit organization supporting debtors in financial difficulties], since I was worried about a huge debt,” says Kim, who is still looking for a job.

The number of Koreans in their 20s feeling the financial burden of college tuitions, unaffordable housing and unemployment is increasing.

Kim Young-hwan, a lawmaker from the New Politics Alliance for Democracy (NPAD), reported last week that the amount of money people in their 20s have borrowed from banks and other financial institutions reached 6.2 trillion won in June this year. He based his report on data from the Financial Supervisory Service.

So 37 percent of all those loans, or 2.3 trillion won, carry crushing interest rates. The balance are borrowed from commercial banks and insurance companies with moderate interest rates of 5 percent to 15 percent.

People in their 20s borrow from loan sharks when they don’t have jobs or good credit ratings and can’t borrow anywhere else.

Ms. Lee, 24, had to borrow from a savings bank a few months ago after she fought with a roommate and had to find a new place to live. Since she only earns about 1 million won per month from a job at a clothing store, the savings banks was the only institution that would lend her money.

In fact, she borrowed from two savings banks - 4 million won from one and 3 million won from the other - to pay a deposit on an apartment and buy household goods for her new home. The interest rates on the loans were 34.9 percent and 34.5 percent. Since then, 166,000 won have been withdrawn every month from Lee’s bank account.

The number of Koreans in their 20s who become delinquent borrowers surpasses 6,000 every year. According to the Credit Counseling and Recovery Service last week, the number of people in their 20s who applied for the individual debt workouts in the third quarter of this year was 1,957, 10.8 percent of total applicants.

“Most students who visit us confuse loan sharks with actual banks,” says Cha Jae-ho, a spokesman for the Credit Counseling and Recovery Service. “They don’t know that a 35 percent annual interest rate is really high. What’s urgently required is systematic financial education for students in middle school, high school and universities.”

“Students have high financial burdens like tuition and the cost of living,” says Cho Nam-hee, head of the Financial Consumer Agency. “But there are no proper financial services for them. Therefore, they tend to borrow money from loan sharks in spite of ridiculously high interest rates.”