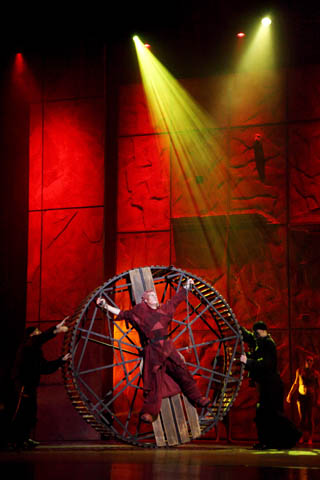 To Nov. 15: The French tour of “Notre Dame de Paris” will hold an encore show commemorating the 10th anniversary since its first performance in Korea. Based on the novel by Victor Hugo that shook Paris with its story of tragic love, greed and madness, “Notre Dame de Paris” depicts the complications that arise between the hunchback Quasimoto, the avaricious bishop Clopin, the alluring gypsy Esmeralda and the royal admiral Phoebus. For this special encore show, director Gilles Maheu and composer Riccardo Cocciante will return and lead an eclectic French-Canadian cast.

To Sunday: “Late Autumn,” or “Manchu,” is a play adapted from a 1966 Korean melodrama directed by Lee Man-hui. Though this production marks the seventh remake of the story, it is the first time it is being staged as a play.

The story revolves around two characters whose lives become intertwined in the least expected way. Anna, who was serving seven years in prison, gets a three-day break to attend her mother’s funeral. On the same bus is a young man Hoon, whom Anna is interested in despite her previous renunciation of love. Anna opens up to Hoon, and the two begin a romance while the imminent end of her trip and their encounter looms.

To Sunday: As a popular Broadway musical, “Cinderella” has won Tony awards and was nominated as the most anticipated Broadway musical of 2015. The gorgeous romantic fantasy captivates the audience with a somewhat different story from the original fairy tale, as Cinderella leaves her sparkling glass slipper behind on purpose to be found by Prince Christopher.

Nov. 25 to 28: Celebrating its 30th anniversary, the Seoul Metropolitan Opera will showcase its production of “Faust.” The production is directed by internationally acclaimed British opera director John Dew, with set design by German designer Dirk Hofacker, who also designed for operas such as “La Traviata” and “Nabucco.” “Faust” is an opera of five acts originally created by French composer Charles Gounod. The story is based on a classic German legend and centers on the life of an old man, Faust, who makes a dangerous pact with a demon named Mephistopheles.

Based on the children’s story by E. T. A. Hoffmann and a music score by Pyotr Tchaikovsky, the two-act ballet tells the story of a girl, Clara, and her peculiar Christmas gift, the Nutcracker. The Nutcracker comes to life as a Prince in the midst of an attack by the Mouse King. Together, Clara and the Prince visit the Land of Sweets, where they encounter figures like the Sugar Plum Fairy.

Dec. 25 to 27: The Sejong Center is showcasing its production of “Carmen,” in collaboration with Teatro Giuseppe Verdi, an opera house located in Busseto, Italy. Based on the novel by Prosper Merimee, French composer Georges Bizet’s “Carmen” depicts the fatal attraction between Don Jose, a corporal, whose love for Carmen, a gypsy girl, as deep and genuine as it is, becomes a threat to Carmen’s independent and free lifestyle. As Don Jose is driven by love and jealously, the lines between reality and fiction, love and hate, sanity and madness are blurred.