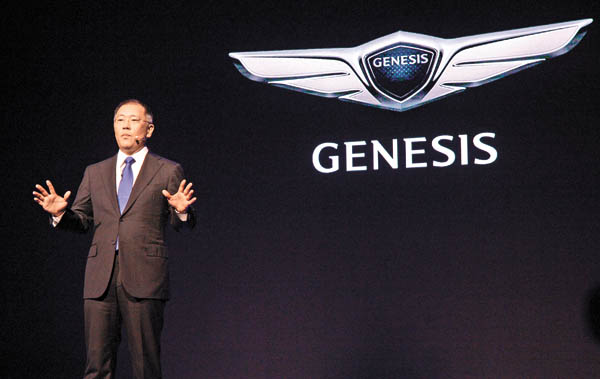 Hyundai Motor is moving into the luxury car market with a new brand, Genesis, the first separate brand under the Hyundai umbrella since the company’s founding 48 years ago.

“We have been preparing this for 10 years,” said Chung Eui-sun, vice chairman of Hyundai Motor and son of Hyundai Motor Group Chairman Chung Mong-koo, at a press conference with about 400 company executives and reporters, including chief designer Peter Schreyer, at Dongdaemun Design Plaza in central Seoul.

Genesis is being launched in response to growing global demand for luxury cars, including in Korea, and to strategically compete with other premium brands such as BMW and Mercedes-Benz.

Hyundai currently sells a premium sedan named Genesis. It is spinning off its name in the same way that Toyota operates the luxury brand Lexus. The existing Genesis sedan will be renamed the G80 and sold under the Genesis brand alongside five other models. 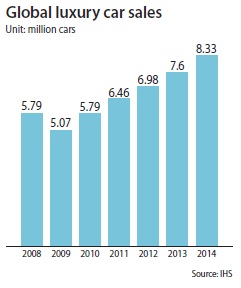 “The luxury car market only accounts for about 10 percent of the world’s auto sales, but we decided to go upscale since the demand in that segment is consistently growing,” Chung continued. “We are ready to compete in the sector, in which global automakers put their latest, high-end car technologies, with the experience we have gained in the past with the Genesis sedan. The brand identity is ‘Human-centered Luxury.’”

The Genesis brand will consist of six models, including the G80 and G90, an upgraded version of Hyundai Motor’s flagship full-size sedan, the Equus. The company had already promised to roll out a fully changed Equus in December. In Korea, the G90 will be called the EQ 900. The other four models will be entirely new, including a near luxury sedan, a midsize luxury SUV, a luxury sports coupe and a near luxury SUV. These will be developed by 2020, starting with the near luxury sedan in the second half of 2017.

Hyundai’s move surprised the industry. Launching a separate brand was discussed in 2008 when the first-generation Genesis sedan was rolled out, but the idea was dropped due to the global financial meltdown. The automaker then has been trying to strengthen its luxury car lineup in order to improve its profits structure, which relies heavily on inexpensive small and midsize sedans and SUVs.

“Hyundai was behind leading foreign automakers in the luxury car market, though the company became the world’s fifth-largest automaker, selling about eight million cars a year,” Chung said. “This is a new challenge and a new beginning dedicated to consumers seeking to go upscale.”

The luxury car market, in fact, is one of the toughest battlefields in the auto industry.

According to a report by market researcher IHS, sales of luxury cars have increased by an average of 10.5 percent per year since 2010, which is 4.5 percent higher than the rate for regular cars. For global automakers such as Toyota and Volkswagen, the growth rate for luxury cars was higher than the rate for normal cars. Sales of Lexus models increased by 9 percent in 2014, while Toyota models only saw a 2 percent rise during the same period.

Profits are better in luxury cars. The average operating profit rate for BMW and Daimler was 8.8 percent of revenues last year, while the average for nine other automakers including GM, Ford, Toyota, Honda and Nissan was 3.9 percent.

One of the keys to success with the Genesis brand is design. In order to compete with trendsetters such as BMW and Mercedes-Benz, the company established a prestige design division at its Hyundai Design Center in Hwaseong, Gyeonggi, and also recruited Bentley’s chief designer, Luc Donckerwolke, who also worked with Peugeot, Audi and Lamborghini. He will join the company in the first half of next year. The Belgian is considered one of the top three car designers in the world thanks to his work on Lamborghini’s Diablo and Murcielago and Bentley’s Flying Spur and Bentayga.

“The Genesis sedan has been an ambassador for Hyundai [in the world],” said chief designer Schreyer. “We are looking forward to having Donckerwolke soon since he had great experiences in a company like Bentley. He will oversee the Genesis brand’s design.”

Executives point out that Schreyer has significantly improved Kia Motors’ designs since he joined the automaker in 2006, after being wooed by Vice Chairman Chung. Kia Motors was in the red until 2007 but turned a profit in the following year. Operating profit for Kia hit 1 trillion won ($883 million) in 2009 and 2.7 trillion won in 2010.