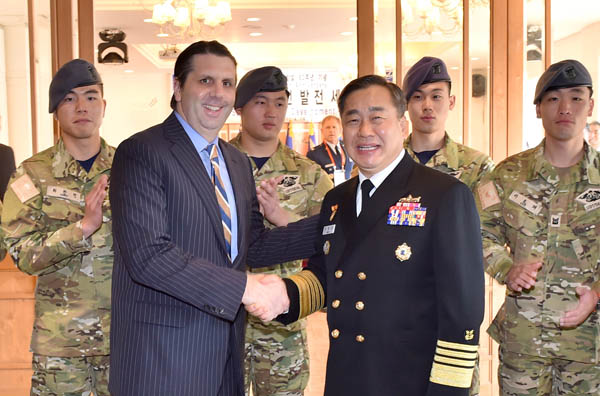 U.S. Ambassador to Seoul Mark Lippert praised the Republic of Korea Navy’s special warfare unit on Wednesday at a seminar in South Gyeongsang to celebrate its 60th anniversary, highlighting its achievements and close link with American troops.

In his key note speech at the seminar, Lippert, a U.S. Navy veteran, lauded the elite UDT/SEAL (Underwater Demolition Team/Sea, Air, Land) unit’s successful special operations “not only on the Korean Peninsula but in the Gulf of Aden.”

In 2011, UDT/SEALs commandos took part in the Operation Dawn mission to successfully rescue the crew of a Korean freighter hijacked for six days by Somali pirates in the Gulf of Aden. The Korean Navy has stepped up measures to protect the waters around the Gulf of Aden, deploying yearly the anti-piracy Cheonghae Unit on a destroyer. However, it also is known for its rescue and salvage missions, like after the sinking of the Seohae ferry in 1993, and the torpedoing of the South Korean Cheonan warship in 2010.

The ROK Navy Special Warfare (NSWF) 60th Anniversary Seminar was held in Jinhae, South Gyeongsang, to mark the founding of the elite UDT/SEAL unit on Nov. 9, 1955. It was attended by top Korean military brass, including Navy Chief of Staff Adm. Jung Ho-sup.