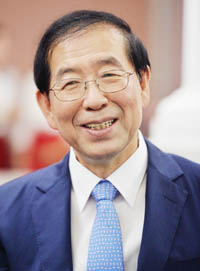 A new program in the Seoul Metropolitan Government’s five-year plan to support unemployed youths has developed into a contentious issue between the ruling and opposition parties.

Saenuri Party lawmakers were quick to criticize the city government’s announcement Thursday that it would provide financial support to about 3,000 unemployed people in Seoul between the ages of 19 and 29 in an effort to help them work toward independence.

Won Yoo-chul, the Saenuri floor leader, lashed out at Seoul Mayor Park Won-soon on Friday, accusing him of trying to score votes ahead of the general election next year.

“I’m worried that if populism were to spread among the local governments like it has in the Seoul and Seongnam governments, they would be doling out financial support to young people, too,” he said.

“Giving money to the younger generation can’t be a fundamental measure for youth unemployment. We need to teach them how to fish, not give them fish; we need to make a rich fishing ground for them.”

The same day, a special response team established for Mayor Park by the Seoul chapter of the main opposition New Politics Alliance for Democracy (NPAD) hit back at the ruling party, claiming that the Saenuri was simply trying to undermine the program by spreading baseless information.

The new program is just one part of the city government’s five-year Seoul Youth Guarantee plan to support young people and mainly targets those who are currently not employed, not in training and not in school.

According to city government figures, 34.9 percent, or 502,000 of men and women in their 20s living in Seoul, belong to that demographic.

“The project is aimed at supporting young people’s basic social activities and the fundamentals for their financial independence,” said Jeon Hyo-gwan, who heads the Seoul Innovation Bureau.

“People between the ages of 19 and 29 who make less than 60 percent of the median income may apply for support. We hope it can be a stepping stone for young people who have failed to get a leg up in society.”

Another project looks to provide more internships to youths in the public sector.

As of 2015, there were 519 open positions, and the city government plans to expand that number to 5,000 by 2020. The internship period will also be extended to up to 23 months from the current 11 months. Anyone between 19 and 39 may apply for the internship positions.

Still, some have expressed concerns over the potential side effects of the city government’s new welfare policy.

“It could encourage more university students to become more lax [about their job searches], because they may choose to delay graduation for the financial support,” said Kim Won-sik, an economics professor at Konkuk University.

The project’s feasibility has also been called into question; local governments are required to consult with the Ministry of Health and Welfare before implementing any new social security system.

In September, the Seongnam city government issued a plan to provide 1 million won each year to people between the ages of 19 and 24. That proposal is still pending following the ministry’s refusal to cooperate.

The Seongnam government has since filed a lawsuit with the Constitutional Court to request the guidelines be changed, saying it violates the autonomy of local governments.

Kim Chung-hwan, a ministry official, said Thursday that the Seoul government’s new plan was “subject to cooperation with the ministry since it’s related to social security.”

However, the Seoul government has argued that it doesn’t need to consult with the ministry, citing differences in its plan from Seongnam’s proposal.