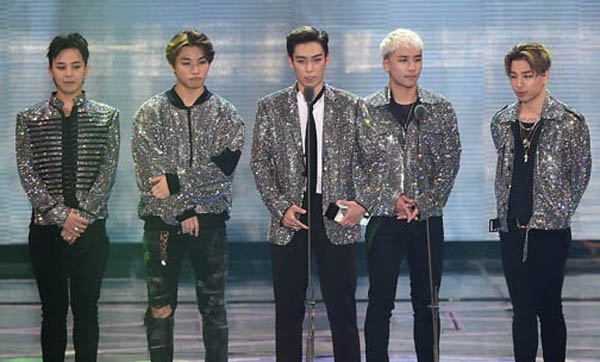 The annual music awards were held at Seoul Olympic Park in southwestern Seoul.

The five-member boy group received awards for Song of the Year, Artist of the Year, a Top 10 award and Netizen Choice Awards.

In an acceptance speech, Big Bang member T.O.P said, “We’re so grateful that we could receive these honors. We will work hard to become artists and we will keep creating new styles of music and performances.”

It was the first time the group performed “If You” publicly.

“Bang Bang Bang” was chosen as the Song of the Year for its catchy sound.

The Album of the Year award went to Exo’s second album “Exodus” released in March. The album has sold more than 70,000 copies in the 40 days after its release.

Since Exo could not participate in the award ceremony due to its concert schedule in Japan, girl group Red Velvet, which is represented by the same entertainment agency, SM Entertainment, received a plaque on behalf of the boy group.