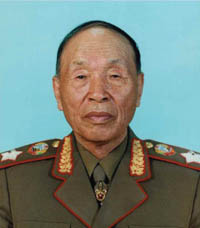 Ri, a military official who spearheaded the establishment of the North Korean regime alongside the country’s late founder Kim Il Sung, died Saturday of lung cancer, according to the Korean Central News Agency (KCNA). He was 94.

Named marshal of the North Korean Army in 1995, the highest military rank in the fighting force, he was one of the last two remaining marshals in Pyongyang before his death; the other is young leader Kim Jong-un, the grandson of Kim Il-sung.

The KCNA reported that a state funeral will be held for Ri on Wednesday morning and that mourners will be received until 7 p.m. on Tuesday. He will be laid to rest at the Central Hall of Workers.

“Marshal Ri Ul-sol was born under a poor farmer in Kimchaek, North Hamgyong Province, and protected the Korean People’s Army and the supreme leaders his entire life,” the KCNA said. “He was a loyal revolutionist of the Workers’ Party and an anti-Japanese champion of the revolution who devoted his all.”

The Workers’ Party of Korea is the founding and ruling political party of North Korea.

An ultraconservative and one of the last surviving members of North Korea’s first generation of leaders, Ri was an anti-Japanese guerrilla who fought for Korea’s liberation from Japanese colonial rule (1910-1945).

In the 1950-53 Korean War, he served as the chief of staff of the fourth division of the North Korean Army and later the commanding officer of the third regiment of the 15th division. Years later, he was granted the titles of colonel general (1972), vice marshal (1992) and marshal (1995).

From 1996 to 2003, he served as commanding officer of the Guard Command, whose role is to protect top North Korean officials, including the Kim leadership. He was awarded twice the title of Labor Hero of the Democratic People’s Republic of Korea.

Ri’s funeral committee, according to the KCNA, is composed of some 170 people, including Kim Jong-un.

North Korean Workers’ Party Secretary Choe Ryong-hae, Pyongyang’s envoy to China’s Victory Day event, was not included on the list as of Sunday, leading local media to speculate that he may have been punished for his poor attempts at mending ties with Beijing when Liu Yunshan, the fifth-most senior member of the Communist Party of China, visited Pyongyang on Oct. 10, the 70th anniversary of the North’s ruling party.

The South Korean government has yet to comment on the omission.