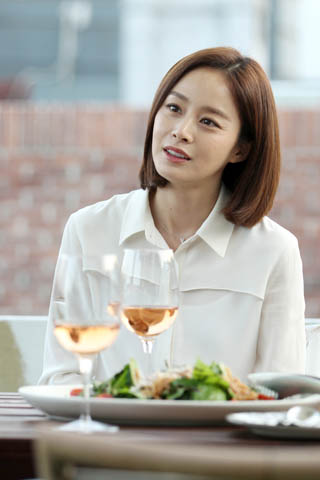 Actress Kim Tae-hee talks with Ilgan Sports at a restaurant in Samcheong-dong, central Seoul, about the TV drama “Yong-Pal,” for which her acting was well-received. [PARK SE-WAN]

Kim Tae-hee, one of the most talked-about actresses in Korea, has begun to redefine herself as an actress in the recently finished SBS drama “Yong-Pal,” which marked her return to the small screen for the first time in two years.

Although her part as the character Yeo-jin, who spent the first six episodes in a vegetative state with her face covered in bandages, wasn’t as big as her previous roles, the 35-year-old actress was at least able to settle the long-standing controversy about her acting skills.

In a recent interview with Ilgan Sports, an affiliate of the Korea JoongAng Daily, Kim discussed how she felt about the drama.

Q. How are you doing these days after “Yong-Pal” aired its last episode last month?

A. I am finally taking time for myself, spending quality time with friends, shooting commercials and resting at home.

How was your experience with “Yong-Pal”?

If “Yong-Pal” were like my previous works where I had so many scenes, it would have been extremely exhausting. But it wasn’t like that with “Yong-Pal.” Other cast members had much more difficult times.

Why did you pick the production despite having relatively few scenes?

As you know, I was in a deep sleep until the sixth episode. I had much fewer scenes and lines compared to other works. But as soon as I read the synopsis, I fell in love with Yeo-jin and thought I just had to take the role without stressing myself out too much. But many people around me worried that my portion wasn’t as big as before. They told me my effort would end up being for nothing.

Do you usually pick projects yourself?

These days, I do it by myself. But before, I was young and didn’t know what kind of screenplays were the good ones. So I just accepted productions that my agency suggested.

Did you feel pressured about the viewership rating?

It would be a lie if I said no. But when we first got the rating for our first episode [which was 20 percent], the cast and I were so surprised that we thought it was fabricated. I didn’t expect it to do so well.

How is your relationship going with Jung Ji-hoon, also known as Rain?

It has been three years now since we started dating. I don’t know why we are continuously embroiled in break-up rumors, while there still are rumors about our wedding. I am always the slow type. I was slow in catching up with acting, and it will be the same for love and marriage.

Every time there are rumors about your romantic relationship with Jung, you don’t seem to rebut it outwardly but just keep silent. Why is that so?

I don’t see the need to do it, unless it is a really big issue.

How come you stay so calm about it?

It truly is uncomfortable, but I guess being part of a scandal tells you how much you still matter to the public, hence that level of popularity. I just hope that false rumors are not accepted as facts later on.