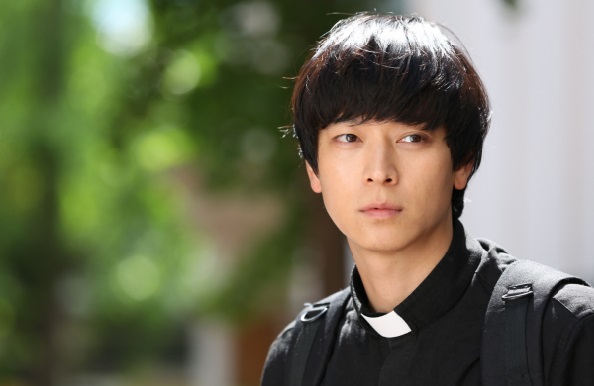 Despite the abundance of interesting new releases in Korean theaters, the locally made occult film “The Priests” opened in No. 1 place, drawing 1.4 million moviegoers over the weekend.

It was the fastest film released in November to reach the one million mark.

According to the state-run Korean Film Council on Monday, “The Priests,” starring Kim Yun-seok and Gang Dong-won, made 11.5 billion won ($9.9 million), taking up 61.9 percent of the box office sales between Friday and Sunday.

Tackling the theme of exorcism, which is rare in Korean horror films, “The Priests” follows the life-or-death exorcism ritual conducted by two priests (Kim and Gang) in an attempt to save a teenage girl (Park So-dam) possessed by a demonic spirit.

Ridley Scott’s sci-fi flick “The Martian” moved up a notch to second place, picking up another 145,971 tickets sold, adding on to its four-week total of 4.7 million admissions.

Steven Spielberg’s historical film “Bridge of Spies,” starring Tom Hanks, sold 133,994 tickets, earning 1.1 billion won in Korean theaters. This is the duo’s fourth project after the successful “Saving Private Ryan,” “Catch Me if You Can” and others.

Roughly based on real events during the Cold War, the movie features Hanks as an insurance lawyer who winds up defending an alleged Soviet spy. The film approaches the issue in an empathetic way by showing the lawyer’s strong determination to exchange the Soviet prisoner for two American captives held by the Communists.

Bradley Cooper’s culinary film “Burnt,” in which he co-stars with Sienna Miller, debuted in fifth with 102,177 attendees. Directed by John Wells of “August: Osage County” (2013), the film explores the highly competitive world of high-end cuisine and chefs coveting Michelin stars.

The romance flick “Eternal Sunshine of the Spotless Mind,” directed by Michel Gondry and starring Jim Carrey and Kate Winslet, was initially released in Korea in 2005 and was re-released here on Nov. 5 to mark its 10th anniversary. It placed eighth, taking in 58,316 ticket admissions so far.