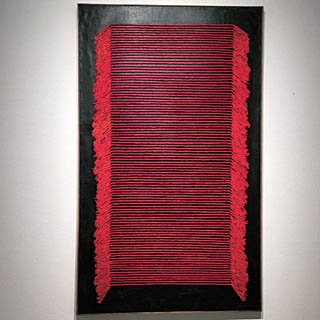 The works by Lee, a cross between two-dimensional drawings and three-dimensional sculptures, were created in the 1960s and ’70s but have seldom been shown to the public. It was because the artist, now 83, remained obscure until he gained recognition in the past few years. Now Lee is a hot artist internationally. He was invited to the Frieze London art fair’s “Sculpture Park” show for the second straight year.

Admission is free. The gallery is closed on Mondays. Go to exit 1 of Anguk station, line No. 3, and walk for 10 minutes.

To Nov. 22: Celebrating the opening of the Suwon I-Park Museum of Art, the exhibition “Now Us: Su Won” features works from over 110 domestic and foreign artists.

True to the exhibition’s title, the wide range of works all serve to bring the artists and visitors together into a collective unit in order to reflect on the past, present and future.

Another theme explored in exhibition, well demonstrated by works artists Kim Haek-doo and Lee Gil-beum, is to communicate each other’s stories by depicting one’s valued objects representational of one’s personal narrative. Transcending time and space, it allows for empathy among artists, visitors, and citizens, solidifying the museum’s function as a facilitator for such interactions.

To Nov. 29: Five bluestone sculptures by New York-based Swiss artist Ugo Rondinone are now on display at Kukje Gallery’s K3 space. The sculptures may remind Korean viewers of goindol, which are Korean dolmen from the Bronze Age, or primitive idols from other cultures.

The artist is known for his interest in time and displacement.

The materials include stainless steel plates used by architect Kim Chan-joong from the System Lab, flexible bamboo used by the Wise Architecture studio, and transparent corrugated plastic roofing sheets by Moon Ji Bang. The other participants are Joho Architecture, Nameless Architecture and Office 53427.

To Jan. 24: The exhibition features kinetic art, robotic art and other new media art by 14 artists from Korea and Australia. Its title “New Romance” is a kind of homonym joke based on fact that many Korean readers read the title of William Gibson’s classic 1984 sci-fi novel “Neuromancer” as “New Romancer.”

Admission is 15,000 won ($12.60) and covers the museum’s other exhibits except for the James Turrell gallery.

Admission to the James Turrell gallery is 28,000 won.

The museum is closed on Mondays and located inside the Hansol Oak Valley resort in Wonju.

Ongoing: “Really?” is the inaugural exhibition of the Arario Museum, which opened on Sept. 1, 2014, in the iconic ivy-covered brick building “Space” designed by the legendary Korean architect Kim Swoo-geun (1931-86).

They are part of the vast collection of Ci Kim, one of Korea’s most important collectors.

The museum recently added a new exhibit - “Eight Rooms” by Chinese artist Li Qing. The work is a re-creation of the artist’s studio and rooms, on whose walls his own paintings are hanging.