Top trends for 2016 fit in a monkey bars matrix

Top trends for 2016 fit in a monkey bars matrix 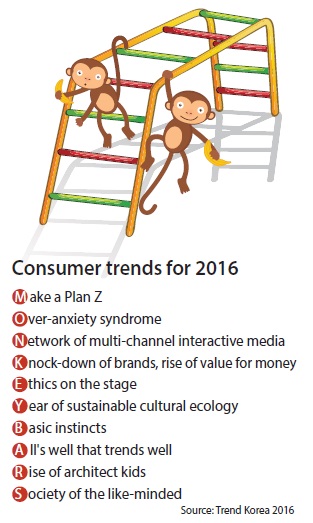 Next year is the year of the monkey in the Chinese zodiac, and renowned trend expert Kim Nan-do has come up with 10 trends for 2016 that may help Koreans tackle the economic slowdown with the swiftness and smartness of a monkey.

Kim, a professor of human ecology in the department of consumer science at Seoul National University, has been publishing end-of-the-year books predicting upcoming trends since 2007. His newest, “Trend Korea 2016,” is his eighth.

“I have defined consumer trends for next year as ‘MONKEY BARS’ after the first letter in each of the 10 trends’ keywords,” he said in a press conference on Monday to celebrate the release of the Korean-language book, “and I hope they help Korea overcome the recession as fast as monkeys cross monkey bars.”

A year ago, Kim predicted the popularity of such trends as sweet snacks and foods, masks, hand sanitizers, selfie sticks, small-size SUVs, low-cost Chinese products, in-house brands developed by convenience stores and Korean buffet restaurants. Those predictions all came through in 2015, although a few other predictions did not.

A social atmosphere dominated by the economic downturn, social networking services, anxiety and distrust has influenced the choice of keywords, he said.

“The Korean economy has slowed down for a lengthy period due to external factors such as interest rates going up in the United States and slumping domestic consumption in China, and social networking services have become a major communication channel,” he said. “The prevailing distrust stems from the sinking of the Sewol last April and rapid spread of Middle East respiratory syndrome this spring, and it has become a crucial element that defines and explains Korea.”

In the book, he pays particular attention to the collapse of brands and rising importance among consumers of products’ performance as compared to price.

“Boasting of one’s fortune through brands is over,” he said. “Value for money will replace the role brands used to play.”

“Knock-down of brands, rise of value for money” is a keyword for one of Kim’s 10 trends in 2016. Examples of that trend are Xiaomi electronic products from China, budget airlines, SK Telecom’s low-cost Luna smartphone and Japan’s Ore-no restaurant chain, where customers dine on quality cuisine but stand rather than sit and leave as soon as the food is eaten.

Kim also noted that Koreans need to prepare for what he calls Plan Z, the worst-case scenario.

“You need a decent survival strategy that will allow you to buy things that you need, however economically stricken you are,” he said. “Visually flawed fruits, refurbished goods and display products will become more popular.”

Koreans will have contradictory consuming patterns next year, Kim predicts, in which, for example, they buy a pricey smartphone and download an app to make donations to charity.