I didn’t pay much attention to Chun Doo Hwan before the Dec. 12 military coup he masterminded.

I was aware that he took the central role heading the investigation team to look into President Park Chung Hee’s assassination, but I did not think he would carry out such an act.

As a military man myself, I had failed to detect the danger. It was actually ironic that I couldn’t stop him from following through with his plan considering I had also overthrown the status quo nearly two decades earlier. 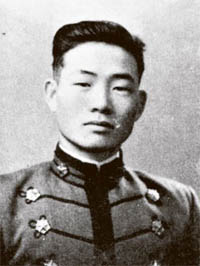 Chun Doo Hwan as a cadet in the Korea Military Academy. [JOONGANG PHOTO]

My first encounter with Chun was in May 1979, when he came to the Blue House to receive a medal in recognition for his role in safeguarding national security.

He was awarded for discovering an underground tunnel near the demilitarized zone that had been dug by North Korea in case of war with the South. Later, I found out that Chun had been standing behind me in November 1971, when I visited a Korean military unit dispatched to Vietnam as prime minister. I might have greeted him but his rank at the time as a colonel wasn’t significant enough for me to remember him.

Some might wonder why Chun and I weren’t that close even though we both graduated from the Korea Military Academy. During my career in public service, I tried to distance myself from the military.

Park Chung Hee didn’t like me to have close relationships with military officials; he worried I might forge my own political faction with their support. Aware of his concerns, I always made sure I had stayed away from men in uniform.

Chun gradually cemented his sway in the military and was supported by Presidential Security Chief Park Jong-gyu. He and Chun had a close relationship, and it was Park who kept Chun from trouble whenever disgruntlement grew over Chun’s efforts to strengthen his support group within the military, known as the Hanahoi.

President Park allowed Chun to strengthen his grip on the faction, thinking it would eventually be part of Park’s own support group. In hindsight, the president simply left the group to expand rather than eliminating it.

Chun later worked under Cha Ji-cheol when Cha served as the presidential security chief. The two did not get along, but in watching the security chief, Chun must have realized what a man with power could do - and Cha behaved recklessly, he could do anything.

After Park Chung Hee was killed on Oct. 26, 1979, Chun became the head of the joint investigation team, and just 47 days later, the members of Chun’s faction had their guns pointed at Army Chief of Staff Chung Seong-hwa.

Chun and his supporters only pursued power. They had no concerns about the future of the nation or even a political philosophy. Their actions were driven solely by greed.

And there was no one challenging Chun’s greed. No one stood in the way of his pursuits.

After the coup, cracks within the ruling Democratic Republican Party emerged. The balance of power increasingly tilted toward a political faction who opposed my party leadership.

Even though I was one of the founders of the DRP, there was considerable opposition to my blueprint for the party. At the center of that opposition were lawmakers whose constituencies were in Daegu and North Gyeongsang, known as the TK group.

[In Korean politics, TK refers to the first letter of Taegu, the old name for Daegu, and Kyongbuk to refer to North Gyeongsang].

Their alliance with Chun Doo Hwan was deepening day by day. The fact that Chun was raised in North Gyeongsang also helped them extend their political alliance. By then end of 1979, rumors had spread that a new political party would be forged with members of the TK group and Chun’s supporters.

I delivered a strong warning to the politicians planning to defect to the party.

“Those who desert the DRP will be remembered as disruptors of progress in history,” I warned on Jan. 7, 1980.

Park Jun-gyu, who was alleged to have been behind efforts for a new party, repeatedly denied he would leave. But the rumors continued to disrupt party order.

Other party members also sought to undermine the unity of the DRP. A group of 17 party lawmakers issued a statement calling for the expulsion of party lawmakers suspected of irregularities like corruption. But I questioned their motives at the time, a point when unity was needed most.

Some in the group who joined the campaign had already been contacted by Chun Doo Hwan. In name, they advocated for cleaner politics. But in reality, they were waiting for a new turn of power. That was best demonstrated by Lee Tae-sup, my former assistant, who later on contributed to the creation the Democratic Justice Party under Chun’s command.

Another man who turned his back on me was Lee Hu-rak, the former director of the Korean Central Intelligence Agency (KCIA).

Lee joined the DRP after he was elected to parliament as an independent and left the country two days before the Dec. 12 coup. He came back four months later, but during the time he was away, he had been targeted by the 17-member group in the legislature, who waged corruption charges against him.

So after he returned, he held a press conference, during which he made a bombshell revelation.

“How can you bake bread without having your hands covered in flour?” he said in response to the allegations against him.

His remarks infuriated the DRP members, who were campaigning for corrupt lawmakers to be ousted. A few days later, he held another press conference, and as I listened to the recording of what he had said, his statements left me dumbfounded.

Lee took an aim at me. “If I were to be ousted for corruption, then the DRP chairman, Kim Jong-pil, should also be kicked out of the party.

“I may have lived a little more comfortably than others [by accepting bribes]. But, in reality, I did not take that much.”

His intention was clear. He wanted to appeal to the Chun group by disgracing me and forcing me out of politics. And in return, he wanted a government position in the new order. He had acutely read the situation, and understood the nature of power.

The people around me recommended I meet with Chun Doo Hwan, but I didn’t, knowing it wouldn’t accomplish anything. Just like him, I had once overtaken the government by force. I knew what he was planning to do.

His targets were not the opposition leaders, Kim Young-sam and Kim Dae-jung - his priority was to politically strangle me and dissolve the DRP.

In the end, I was the only one standing who tried to keep the party alive. I was the DRP chairman in name only - that’s when I realized how vulnerable power is without a gun.

The DRP was later dissolved and had all of its assets seized by Chun Doo Hwan’s Democratic Justice Party.

That marked the end of the Democratic Republican Party’s 17-year stand.