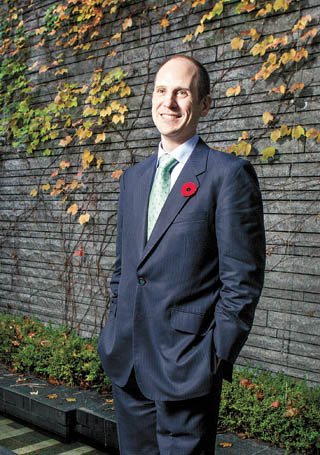 It was 2010 when Canadian Ambassador to Korea Eric Walsh, then the minister and deputy head of mission in Berlin, first saw an apt measure of Korean education.

Germany had ranked in the middle among the 75 countries scored in the Program for International Student Assessment (PISA), a worldwide study that measures the abilities of 15-year-old students in science, mathematics and reading.

“It caused a national obsession in Germany,” Walsh said. “We had delegations from Germany to Canada wanting to talk about the PISA scores. I was looking through the list and that’s when I saw Korea. Korea had done really well.”

Korea ranked fourth in math, sixth in science and second in reading.

It was years later when Walsh realized he’d be serving his first ambassadorial role in a country where more than 18,000 students visit his home country each year, primarily to study English.

In an interview Monday, the ambassador discussed his new life here and how the strategic relationship between Korea and Canada was growing based on education.

The annual Canada Education Fair is set to kick off Friday at COEX in Gangnam District, southern Seoul.

Q. How’s your new life in Seoul coming along?

A. It’s been great. I like the city, the public transit, the food, and the fact that there are so many cultural acts. Before coming here, I thought it would be difficult to fit in. This is the biggest city I’ve ever lived in. There’s no downtown in Seoul; everywhere is downtown. You get on the subway and go for 45 minutes and you’re still downtown. I thought it would be a little overwhelming to live here, but I realized that each neighborhood has its own distinct personality.

I heard you moved out of your villa in Seongbuk-dong and moved to an apartment almost a third of the previous size near Namdaemun Market in central Seoul. Why?

It’s a global effort by the Canadian foreign ministry to ensure that our ambassadors are in places that represent Canada in the best way. In some places, [Canadian ambassadors] were in really expensive residences and paying a lot for maintenance but weren’t necessarily getting a lot out of those places.

In my case, it was nice to go outside in the summer, but I don’t know about winter. It had a really steep hill and the public transit wasn’t easy for people to get there. So we made the decision to move to a smaller place in the downtown area, where it was easier to get in and out.

The reintroduction of state-authored history textbooks is currently a controversial issue in Korean education. How do Canadian schools teach history?

What’s important in our educational system is critical thinking. Teachers convey to students that regardless of what they’re reading, they should think critically about it: Who wrote the textbook? What is their motivation? Is this argument presented as neutral or in favor of one side? That’s something encouraged in Canadian education. Students don’t just take what they’re given. They ask themselves: Does this match with other sources I’ve read and my own experience?

Why do you think Canada is such a popular destination among Korean students?

A thing I’ve heard from Koreans about the attractiveness of Canada is that when they’re on a university campus there, nobody knows they’re a foreign student. Canada has so many Korean-Canadians and people from other ethnic groups that people can’t tell just by looking at somebody whether they’re a foreigner. The advantage of this is that everybody brings their own learning style and their own experience to Canada, and students can have a really international experience even by staying in just one city.

Another advantage of Canadian education is that each province has its own system, so they all have different educational resources. There are the big-name universities, medical schools, law schools, and then there are the technical colleges, animation and art colleges, etc. Everything you might want to do with your future, there’s a place in Canada that specializes in that.

And then there’s our immigration system that makes our work permit more flexible [than other countries]. If you get a university degree in Canada, you can stay in Canada up to three years to work in the field in which you’ve studied. And then if you’re interested in staying longer, you can be on that track and eventually become a citizen.

I want to be the “good news ambassador.” When people see me coming, or when I call people, I want others to think, 'Oh, that’s because he’s bringing good news.' I’ve never been someone worried about legacy - somebody who says, “I’m going to be here for this many years and by the time I finish, I want to achieve this many things.” I take things one at a time. I want to seize opportunities where I see them.

For more information about the Canada Education Fair, call 02-6351-3008 or visit www.canadaedu.or.kr.