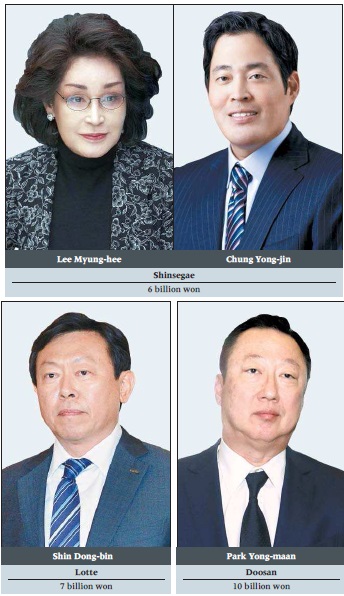 With two days until the announcement of duty-free licenses, rival applicants are currying favor with the government by pledging donations to help young people get jobs.

The latest is Shinsegae Group Chairman Lee Myung-hee, who donated 6 billion won ($5 million) to a government-initiated fund along with her son Chung Yong-jin, who is CEO of the retail group. Executives of the group will fork out an additional 4 billion won for the Youth Hope Fund, which supports aspiring young entrepreneurs.

The fund has become a main vehicle for contending duty-free operators like Lotte Group and SK to build good public relations.

Shinsegae DF, a Shinsegae unit in charge of running the duty-free business, has submitted bids for duty-free licenses up for grabs.

The Korea Customs Service is currently reviewing four duty-free shop licenses - three in Seoul and one in Busan. The customs agency is looking at different factors including social contributions by the operators, prompting companies to announce big donations to the government’s fund.

The announcement of the successful winners of licenses is expected to be made on Saturday.

Lotte Duty Free hopes to renew licenses for two shops in Seoul, while SK Networks wants to retain one in Seoul. Shinsegae is in charge of a duty-free shop in Busan, but it is eager to expand its duty-free business to the capital city. The group applied for the three soon-to-expire licenses in Seoul.

The donation by Chairman Lee and her son signals Shinsegae’s ardor. She rarely appears in public or makes any kind of announcement.

Shinsegae earlier announced it will invest a total of 270 billion won through 2020. The investments will mainly go towards attracting tourists and forging partnerships with local merchants, particularly those working at Namdaemun Market in central Seoul.

The traditional open-air market is close to Shinsegae Department Store, where the operator hopes to house a new duty-free shop if it wins approval from the customs agency.

Doosan Group, a machinery and construction conglomerate, is also pledging donations to improve its chances of winning licenses.

The conglomerate is promoting its Doosan Tower mall in Dongdaemun as its duty-free venue.

The group plans to partner with nearby shopping complexes to establish a K-pop-themed hall while helping aspiring fashion designers and smaller retailers working in the area.

The chairman donated an additional 10 billion won of his personal assets to a new start-up accelerator in a fervent move to repair the group’s public image, which was badly tarnished by an ongoing family feud.

The contribution will be part of the 100 billion won allocated for the tentatively named Lotte Accelerator before it officially launches early next year.