Producer trio back with 2nd album

Producer trio back with 2nd album 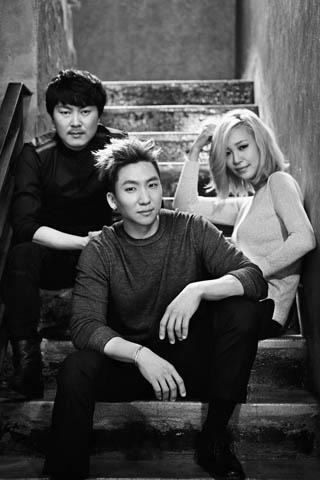 Up-and-coming music group 2LSON have demonstrated that they can sing with the release of their second album, “1 Year.”

The group, which began as producers with no trained vocalist, worked with talented artists such as Ailee and Dindin, as well as singing themselves on their latest album, which has 12 songs. Their goal is to exceed the good reviews they got for their first album, “The First,” released three years ago.

What has changed since then is that the group, consisting of composers and producers LE, Jason and Noel, is now equipped with more confidence. Back in 2012, they were filled with doubts and just hoping to stay afloat in the music industry with the release of their first album.

But after their song “I’m in Love” made it to the No. 1 spot on local music charts, the group started to gain more widespread popularity and now hopes to make a long-lasting impact.

The songs on the trio’s latest album are easy to listen to, without any big surprises. Each song on “1 Year” has a different feeling, making the entire album very fulfilling to the ear.

The group, which said they hope to sell 100,000 copies of their new album, recently sat down with Ilgan Sports, an affiliate of the Korea JoongAng Daily, and shared what they hope to express through their work.

Q. How would you introduce your title song?

LE: The name of the song is “A Year Like a Day,” and its lyrics are about the daily routines of [content] creators. It is a story about freelancers like us. We talk about how we divide a day given to us in our lives, how we write songs at dawn, wake up in the afternoon, eat and then work again.

Jason: Our day repeats all the time, but the emptiness in our mind doesn’t get any better even after a year, and then we start to feel doubt about whether we can do what we really want to do.

Noel: It is a very honest story. Seeking happiness is something that continuously happens for everybody until death. This song delivers an encouraging message - “Let’s be hopeful and live cheerfully” - to those who think their days are too short when they have a very long way to go.

How close do you think you are to the road of success?

Jason: We wanted to be acknowledged musically, and I think we have accomplished that. However, accomplishing one thing doesn’t put an end to our lives. I think we are at the 10 percent mark.

LE: I hope the group’s music is still played in 100 years. I want our music to be an inspiration so that other musicians can dream.

Noel: When we think we have accomplished something, we long for something new, every time. It is because we continue to want something more. And wanting more is the dream. I’m still yearning for something.

It seems like you don’t really make songs that are catchy. Why is that?

LE: I don’t think we are the type of artists like Lady Gaga or Beyonce who make songs with hooks. We do think about making our work appealing to the public, but we want to keep our colors in the process. I think the public has a very mature ear for music. Before, when Jason worked on the melodies, I would redo them to make them easier for the public to listen to, but now the listeners do get the music even when I don’t touch it.

What are some concerns the group has for now?

Jason: Our short-term concerns are to decide what project to do next, the response from listeners about our newest album and how to live this month. For the long term, we think about what kind of artists we want to become.

Noel: As we get older, I sometimes think our thinking process also becomes outdated. I [want our music] to not be changed and never get old.