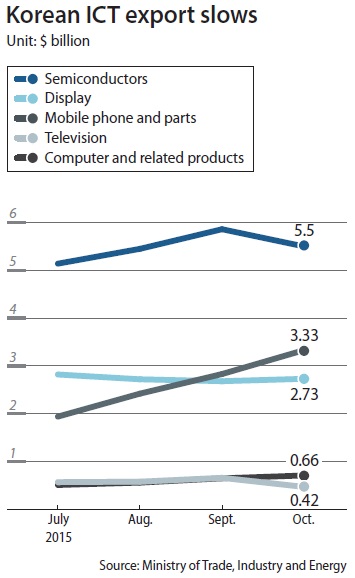 Korea’s exports of information and communications technology (ICT) declined in October for the first time in three months, according to the Ministry of Trade, Industry and Energy on Thursday.

ICT exports last month shrank 1.6 percent to $16 billion compared to the same period a year ago.

Despite declining on a year-on-year basis, exports were the highest monthly level for the year. ICT exports were $15.9 billion in September.

The government said a slowdown in global demand was the cause. It cited data from technology research firm Gartner that showed the global ICT market this year is estimated to shrink 4.9 percent year on year.

Computers and related equipment reached $660 million, up 3.8 percent compared to last October, thanks to the popularity of light-weight solid state disks (SSD). Exports of secondary memory sales such as SSDs alone were $350 million.

However, shipments of Korea’s long-time flagship export products - semiconductors and displays - struggled as their prices fell.

Korean semiconductor exports were worth $5.5 billion last month, down 7.5 percent year on year, after per-unit prices of DRAM and NAND flash memory faced declines due to price competition from Chinese rivals and oversupply issues.

Traditionally, October and November are considered to be high season for chipmakers, as they receive orders from smartphone makers who are preparing for Christmas.

Display exports shrank by 11.7 percent year on year to $2.73 billion last month, mainly due to declining global demand and per-unit prices. A shift in industry practices was also a factor. Completed LCD panels have been traded traditionally, but the market started to trade unassembled parts of panels at 70 percent of the price of the completed panel.

By region, exports to China and the United States went up.