Prescient prof says BOK must cut base rate to 0%

Prescient prof says BOK must cut base rate to 0% 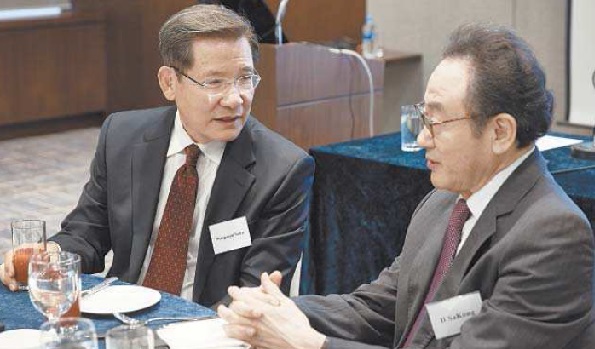 Sohn Sung-won, economics professor at California State University Channel Islands, left, and SaKong Il, chairman of the Institute for Global Economics, talk at a conference hosted by the institute at the Korea Federation of Banks building in Seoul on Thursday. [INSTITUTE FOR GLOBAL ECONOMICS]

A Korean-American economist known for his accurate economic forecasts said the Bank of Korea should take a more aggressive approach by lowering the base interest rate to zero.

Sohn Sung-won, an economics professor at California State University Channel Islands and former member of the President’s Council of Economic Advisors at the White House during the Nixon administration, said the Korean central bank doesn’t have to follow in the footsteps of the U.S. Fed if it cuts the key rate in December, at a lecture organized by the Institute for Global Economics on Thursday.

“I would recommend the Bank of Korea cut the base interest rate to zero as soon as possible - not a quarter percent at a time, but to zero,” Sohn said. “Cutting a quarter percent really has no impact. The BOK needs to move stronger and faster to dramatically shock the financial market.”

Sohn said the domestic Korean economy is still sluggish because the real interest rate remains high. He explained the third-quarter growth surprise was a temporary event thanks to government programs to boost consumption.

Overall, Sohn thought that the Korean economy is healthy enough to sustain a lower interest rate in many aspects.

Regarding concerns of capital outflow, Sohn said outflow will happen, but the country won’t be hit hard because of the global financial market’s confidence in the Korean economy, due to foreign exchange reserves of over $300 billion.

“Korea will be able to manage it,” he said. “I don’t mean that Korea should exhaust billions of dollars from the reserve, but it should be able to use up to some $50 billion to cushion the ups and downs. [Foreign] money will come back when things get better.”

Many usually worry that a low interest rate may further boost the household debt-to-GDP ratio, which many experts think is already too high.

However, Sohn emphasized that the ratio may not be as high as the Bank of Korea thinks, as Korea is considered to have larger GDP than the official statistics show thanks to the underground economy.

Sohn was also positive about the high portion of liquid assets held by Korean households. This is different from other countries like the United States, where people build up illiquid assets and are more able to sustain debt as a result.

“The composition of assets is significant when judging how much debt the country can tolerate,” he said, explaining that Korean consumers usually have significant savings, which could cushion any impact from the Fed raising the key rate.

Sohn emphasized that the zero interest rate can be a sustainable remedy for both domestic consumption and sluggish exports.

“If we lower the interest rate, one of the effects will be depreciation of the Korean won, which will help Korean exports,” he said.