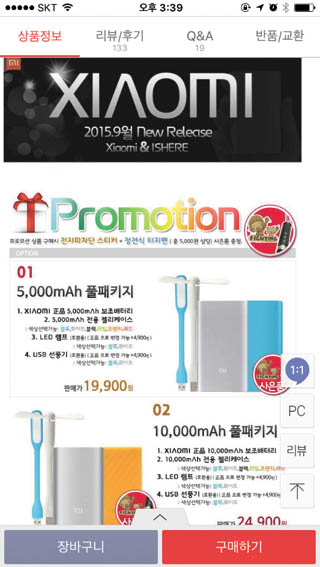 Through a memorandum of understanding signed at Xiaomi headquarters in Beijing, 11th Street vowed to cooperate with the Chinese company as it advances into Korea.

The partnership will include Xiaomi’s subsidiaries, affiliates and business partners, announced SK Planet, itself a subsidiary of SK Group.

The two companies will work together to prevent and root out the circulation of copycat products, propel electronic transactions and improve consumers’ trust.

“The MOU has confirmed 11th Street’s leading position in Korea’s online commerce,” said Park Joon-young, head of merchandising at 11th Street. “We intend to more proactively cooperate with Xiaomi to eliminate the sales of counterfeits, build consumer trust and help its subsidiaries and affiliates enter Korea.”

“11th Street has served as a reliable bridgehead for Xiaomi’s sales in Korea so far,” said Qi Yan, vice president of Xiaomi, “which led us to choose [the company] as our strategic partner.”

Xiaomi is just five years old and has no flagship store in Korea, but has been making a killing here because of its high-value, low-cost products.

On 11th Street’s online mall and mobile app, Xiaomi products saw their accumulated revenue in the first 10 months of this year grow 15 times the revenue recorded in 2014.

When 11th Street exclusively debuted the wearable fitness tracker Mi Band 1A on Sept. 8, all 1,500 units sold out in just four hours.

Rumors circulated in August that Xiaomi would open a store in a shopping mall in Bundang District, Seongnam, after a large banner on the building announced that a Xiaomi shop was coming. It turned out the banner carried the wrong information.

The MOU on Thursday is again raising speculation that the Chinese brand, which offers many of the same kinds of products as Samsung Electronics, will launch a physical store location in Korea soon.

The Chinese rookie on Wednesday released rechargeable AA batteries that can last as long as seven years but cost a fraction of the price of ordinary ones. Each of the Mi Rainbow 5 batteries costs around 180 won (15 cents).