K-pop girl group 9Muses recently traveled all the way from Seoul to Jeungpyeong County, North Chungcheong, to perform for soldiers stationed there. 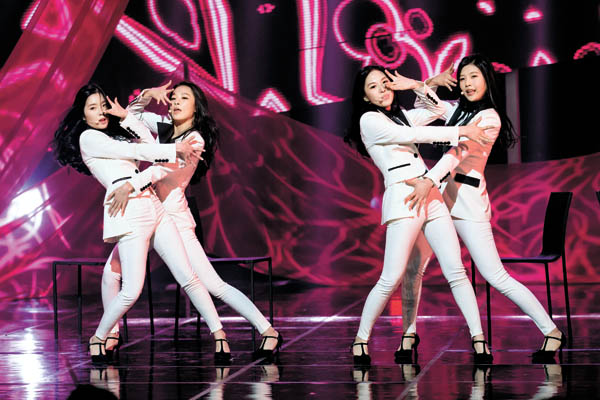 It was a tough journey. It took more than two hours for the eight-member girl group to reach the destination. The road was not well-paved, and some sections were full of twists and turns. Their performance was not broadcast on TV, and the girl group was also paid a lot less for the gig compared with other performances hosted by private event organizers.

To put it simply, it was one of the least attractive jobs out there for entertainment groups, but 9Muses could not turn down the offer.

“Many people think of 9Muses as guntongnyeong, and they have been much loved by soldiers for a long period of time,” a person who works for Star Empire Entertainment said. “Thus, we try not to say no when we get offers from the military.

“In addition, popularity among young soldiers helps expand their fandom among music fans in their 20s.”

The neologism is often used when describing girl groups that are popular among members of the military.

And the title of guntongnyeong is much coveted among girl groups because “popularity within the military is often used to measure one’s popularity,” according to another industry insider.

Because of this, many girl groups take time to perform at military bases, which are usually located in remote areas of the country.

Recently, the JoongAng Ilbo wanted to identify which girl group among all-female acts were the No. 1 choice among soldiers. The newspaper ran a survey of 466 soldiers who were on their way back to their posts after taking leave.

It turned out that the eight-member girl group AOA received the most number of votes among survey responses. The respondents who voted for AOA included soldiers of various ranks.

Indeed, AOA has been having its best year yet since signing 12 endorsement deals this year alone. Among the group’s eight members, the popularity of Seolhyun is so high that promotional posters and life-size cardboard cutouts featuring the singer have been stolen from SK Telecom’s retail stores.

The Seolhyun promotional posters and cardboard cutouts are even resold on the country’s largest second-hand online market at exorbitant prices.

To be sure, popularity ranking among soldiers is somewhat different from the rankings generated by online music charts or TV music shows.

Girls’ Generation is undoubtedly a top-notch girl group, but they were ranked sixth by soldiers, while rookie girl group Red Velvet, who are still unknown to many music fans, were ranked in second place. Red Velvet debuted in August of last year.

Apink and Girl’s Day, which were yesterday’s guntongnyeong, have been pushed aside by AOA to land in third and fifth place, respectively.

EXID came in fourth place, but the group was especially popular among older soldiers.

“Because a new batch of soldiers join the Army every two years, the popularity of a certain girl group does not last that long,” a solider stationed at a military camp in Gyeonggi explained.

There is an important requirement for girl groups to become the favorite of soldiers, too.

“Soldiers tend to like girl groups of their age,” said Lee Ji-seon, a producer for “Train for Soldiers,” a TV show produced by K-Force Media.

Consequently, the members of AOA and Red Velvet were born in the early 1990s, and they are of a similar age to new recruits. On the other hand, most members of Girls’ Generation are in their late 20s, except the youngest one, Seohyun.

Park Shin-hyun, 22, who finished his mandatory service in August, said, “All eight members of Girls’ Generation are older than the average soldier, and they are less appealing compared to other girl groups in that sense.”

The Wonder Girls, who once vied for soldiers’ love alongside Girls’ Generation among soldiers, came in 11th.

“We try to invite popular girl groups, but it’s hard for us to book them because it is a long trip for them and we can’t pay them like other private festival organizers do.”

Because of the lower budget, the military often invites obscure groups.

K-Force Media said it has booked 53 girl groups over the past three years, and girl group Stellar performed the most with 32 performances, even though the group would not ring a bell with most K-pop fans.

Still, most entertainment agencies think highly of performing for soldiers.

“[Military performances] lack many things compared to other events, but they help girl groups develop positive images, and the reaction from the audience is explosive,” one entertainment industry insider said. “So we think of offers from the military as precious.”