Korea’s two major airlines are about to duke it out.

Korean Air and Asiana Airlines have introduced different strategies to win the battle against low-cost carriers (LCC), which have rapidly stolen market share with their cheap flights and competent service.

Jeju Air, the largest LCC and most recent to be listed on the stock market, has overtaken Asiana to rank third by market capitalization among domestic carriers, even though Asiana’s revenue is 10 times larger than that of Jeju Air. Korean Air is currently top-ranked.

To counteract the threats by the LCCs, Asiana proposed a seating arrangement plan based on actual demand, while Korean Air announced a premium seating upgrade strategy.

Asiana was the first to take action. Kim Su-chun, the 59-year-old CEO of Asiana Airlines, declared the company would eliminate first-class seats from all airplanes except for the large-size A380 in August.

The plan aims to increase the number of passengers by providing more cheap seats in place of fancier options.

“Despite the favorable oil prices, exchange rate and growing demand for flights, the industry is in a crisis of decreasing sales profits,” Kim said. Asiana’s revenue for the first half of the year was 2.6 trillion won ($2.2 billion), but its operating losses totaled 14 billion won. The company explained that the results were largely influenced by travel cancellations and widespread hesitation to travel due to fears about Middle East respiratory syndrome earlier this year.

However, major carriers are most worried about the growing presence of LCCs in the market.

Jeju Air and other LCCs like Jin Air, T’way Air, Eastar Jet and Air Busan collectively accounted for 58.6 percent of the flights on the flagship Gimpo-Jeju route in the first half of this year, outpacing both Korean Air and Asiana Airlines. The rate first surpassed 50 percent in 2011. 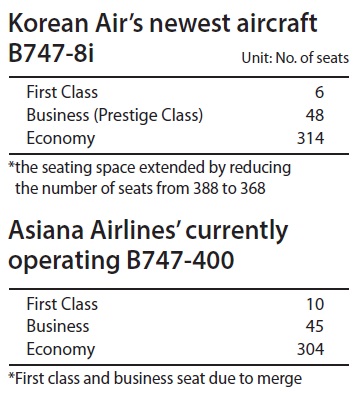 Adding to the circumstances, Jeju Air - which already operates 25 routes in China, Japan and Thailand - will add flights between Incheon and Danang, Vietnam, starting next month. Jin Air will begin flying the Incheon-Honolulu route, also next month, which is a route traditionally dominated by larger airlines.

It is rare for an LCC to begin long-distance international flights, which are usually considered only possible for major carriers.

Among LCCs, Jeju Air poses the biggest threat to the two giant airlines. It recently went public on the Korean stock market and has outpaced Asiana Airlines’ 956 billion won with a market capitalization of 1.25 trillion won.

“It is a choice and concerted strategy to eliminate first-class seats in aircraft besides the A380,” said Cho Young-seok, a managing director at Asiana Airlines. Due to demand, flights to the United States and Europe will still have first-class seats.

Currently, 12 of Asiana’s aircraft have first-class seats - four A380s, four B747-400s and four B777-200s. All aircraft other than the A380s will have their first-class seats removed. In some aircraft, business-class seats will be discontinued as well. Asiana is also considering increasing its number of aircraft without different seating sections, known as mono-class, by modifying four additional B767-400s and some of its A320s.

Asiana’s focus on real demand is related to its plans to establish a new LCC affiliate, Air Seoul. The company aims to strengthen its long-distance flights while securing its short- and medium-distance international flights to China, Japan and Southeast Asia by operating them under Air Seoul.

In the meantime, the nation’s top carrier, Korean Air, is focused on the premium sector. “First-class service is a big part of an airline’s brand image, and our focus is related to our pride as a national airline company,” stressed an official from the company.

In addition to operating first-class services, the airline is trying to improve service quality by reducing the number of seats and instead expanding the space allotted to each seat.

For example, the body length of the new B747-8i is 5.6 meters (18.4 feet) longer compared to the existing B747-400, which allows space for 50 additional seats. However, Korean Air only added 30 seats and provided extra room for passengers. As for the seating arrangement, six were assigned to first class, while 48 were business class. The remaining 314 were economy class.

“We will provide customers with upgraded levels of premium service,” said Cho Won-tae, the 40-year-old vice chairman of Korean Air who handled delivery of the B747-8i.

The company introduced the new B777-300ER airliner as well, which is equipped with upgraded in-flight entertainment systems as well as fancier first-class and business-class seats. Its latest first-class seats are so-called Kosmo Suites and guarantee a passenger’s privacy via sliding door in between the seat and corridor. The width of the seat extends an additional 20 centimeters when a passenger wants to lie down, and the suite also includes a personal closet. They come pre-installed on the B747-8i and will be placed in the newly acquired planes as well. The company reports that each seat costs 250 million won to install.

“I assume the CEOs of the two companies are seeing different demands in the market,” said Yoon Moon-gil, a professor at Korea Aerospace University. “Asiana is forecasting that demand for the premium sector will not increase, but Korean Air is seeing the premium market as a valid target and is willing to grab customers.”

“Since profits from long-distance flights account for more than half the total, the premium strategy may pay off,” said Shin Min-suk, an analyst at Hana Financial Investment.

Amid the strategic changes, premium economy-class seats introduced by foreign airlines are attracting interest. The level of the seat is between economy class and business class, with more space than an economy seat but less cost than one in business class. Air France, British Airways, Turkish Airlines and Lufthansa of Germany are all equipped with the offering. Singapore Airlines is also planning to launch the seating next month.

“The popularity of the new class has been proven through the performance results of foreign airlines,” Prof. Yoon said. “National airlines will have to look closely into such a change in the market.”

There have been no decisions made thus far about adding the new middle class into national aircraft, according to officials from Korean Air and Asiana Airlines.