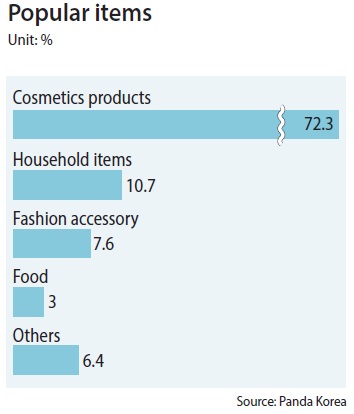 Thirty-something Chinese women in big cities are the largest clientele base of online shopping malls selling Korean products, according to a survey by Panda Korea, a cross-border e-commerce site.

The site, which has 2.5 million Chinese consumers, polled 1,000 subscribers last month to learn their backgrounds and preferences.

People in their 30s were the biggest user group, at 50.7 percent. Users in their 20s accounted for 27.3 percent, and teenagers accounted for 16.1 percent. Of the users, 16.8 percent live in Beijing and 10.1 percent in Shanghai.

Cosmetics products were the most popular items, followed by household items and fashion goods.

The consumer preference reflects the gender ratio of the e-commerce platform. Female consumers account for 82.6 percent and male shoppers 17.4 percent.

Users visited the Korean products-only site for the reliability of products, while a majority of the users placed orders once or twice per month on average and many prefer to browse items during lunchtime.

The e-commerce platform opened earlier this year, but it has 2.5 million Chinese subscribers.

Lee Jong-sik, CEO of Panda Korea, said the company will set a sales target of 100 billion won ($85 million) backed by the increasing popularity of Korean products among Chinese consumers. He is also hoping to increase the platform’s membership to 10 million next year.

The strong demand for Korean-made products was proved on Singles Day, one of the biggest shopping days in China, when several Korean brands scored record daily sales and their inventory sold out.