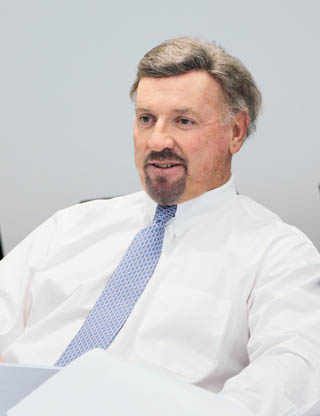 Dave Zuchowski, CEO of Hyundai Motor America, discusses the company’s strategies for luxury cars in the U.S. market at its headquarters in Los Angeles on Monday, local time. [HYUNDAI MOTOR]

LOS ANGELES - After launching its luxury Genesis brand earlier this month, Hyundai Motor has now said it will roll out the new flagship G90 sedan in the United States in January.

The same model will be sold in Korea as the EQ 900 starting next month.

“The G90 will be rolled out at the Detroit Auto Show in January, which is recognized as one of the world’s biggest auto shows,” said Dave Zuchowski, CEO of Hyundai Motor America (HMA), during a press briefing held at its headquarters in Los Angeles on Monday, local time. “The luxury car market is a segment that is growing consistently, and we expect this new G90 to expand Hyundai’s share in the U.S. market.”

Although the United States gave up its title as the world’s biggest auto market to China in 2009, it is still the largest market for luxury vehicles. Hyundai has said that the success of the Genesis in the United States will predict its future in the global market, as it will be going toe-to-toe with luxury heavyweights like Toyota’s Lexus, Nissan’s Infiniti, BMW and Mercedes-Benz.

About 1.8 million luxury vehicles were sold in China last year.

Hyundai has been targeting the luxury market in the United States over the past few years, introducing its first-generation Genesis sedan in 2008. The model was named North American Car of the Year in 2009, and its success has led the company to gradually boost sales in other markets like the Middle East and Russia.

Since the company has decided to reuse the Genesis name for the brand, the existing Genesis sedan will be renamed the G80 in the U.S. market next year.

“To evaluate this year’s performance [for HMA], I grade us as a solid B,” Zuchowski said. “We accomplished our sales goal of selling 765,000 units this year and made a market share of 4.4 percent, but considering that other automakers grew relatively more than us, we can’t say we were great.”

Zuchowski added that HMA has planned to expand its SUV lineup from the current two, consisting of the Tucson and Santa Fe, to six by 2021, since the demand for SUVs and pickups has been growing due to low international oil prices. Hyundai’s bread-and-butter product has historically been sedans, but the segment has been growing only 4 to 5 percent every year.

“Expanding the SUV lineup and the launch of the Genesis brand will help us expand our share in the United States,” Zuchowski said.