Supporters of the main opposition party believe that its current chairman, Moon Jae-in, can’t pull off an election victory on his own and want him to continue leading the party in partnership with other political heavyweights, a JoongAng Ilbo poll showed.

Moon, the sole chairman of the New Politics Alliance for Democracy (NPAD) since February, has had a rocky tenure. After he invited outside reformists to overhaul the party’s nomination rules over the summer, disgruntled members demanded Moon’s resignation. After the NPAD suffered a crushing defeat in October by-elections, the pressure intensified for him to step down. Moon refused.

The poll had a 95 percent confidence level, with a plus or minus two-percentage-point margin of error.

According to the poll, 59.6 percent agreed that the NPAD won’t be able to win the April general election and 2017 presidential election if it is headed by Moon, while 35.1 percent disagreed.

Asked about some NPAD lawmakers’ demand that Moon resign, 65.6 percent of the party supporters said Moon must not resign, while 24.1 percent said Moon should step down from the chairmanship.

Many NPAD supporters preferred a joint leadership by Moon, Rep. Ahn Cheol-soo and Seoul Mayor Park Won-soon to make up for Moon’s weaknesses. According to the poll, 39.2 percent said such an alliance of the three politicians is their preferred form of NPAD leadership.

Those three politicians are considered NPAD presidential hopefuls. Moon himself ran against Park Geun-hye in the 2012 presidential race and lost.

Ahn, a businessman-turned-politician, also tried running for the presidency in 2012, competing against Moon for liberal votes. That competition was bitter from the start and less than a month before the election, Ahn dropped out of the race and gave his support to Moon. He became a lawmaker in 2013 by winning a by-election as an independent and later joined the NPAD.

From March to July 2014, the party was jointly led by Ahn and Kim Han-gill, a senior lawmaker.

Park, a lawyer and civic activist, was elected mayor of Seoul in a by-election in October 2011. He won the victory as an independent with support from Ahn and liberal opposition parties. He later joined the main opposition party and was re-elected in July 2014.

Another 27.8 percent of respondents said they would prefer a joint election campaign committee that includes leaders of all NPAD factions, including Moon. Another 25.4 percent said they want the NPAD to hold a party convention to elect a completely new leadership.

“Moon’s leadership is weak, but NPAD supporters don’t see any other option,” said Kang Won-taek, a political science professor at Seoul National University. “They want the powerful politicians of the party to work together to overcome the NPAD’s crisis.”

Moon and his strategists appear to be aware of the situation. An aide close to Moon told the JoongAng Ilbo on Monday that Moon plans to form an alliance with Ahn and Park, and divide responsibility for nominations for the general election in April in order to quell demands for his resignation. 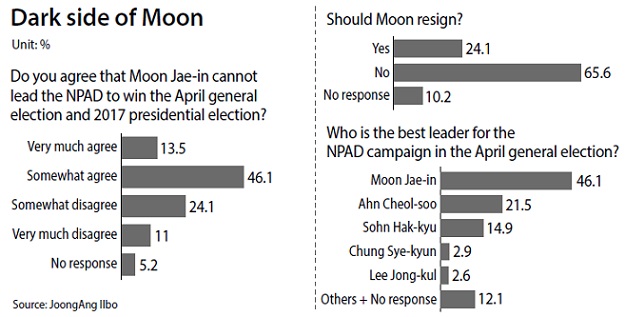 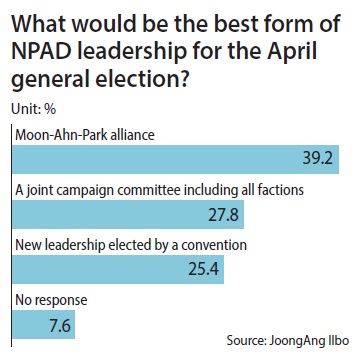 “We plan to create a new leadership panel to oversee the upcoming general election,” the source said. “In addition to Moon, we want to invite Ahn, Park, South Chungcheong Gov. Ahn Hee-jung, former lawmaker Kim Boo-kyum and a representative politician from the Jeolla region. They will be offered ways to make nomination recommendations.”

He said the political leaders won’t be able to make direct interventions in the nomination process, but they will be allowed to recommend people when the party creates a list of proportional representative candidates and makes so-called strategic nominations.

While the NPAD plans to field candidates through open primaries, 20 percent of the electoral districts will have candidates hand-picked by the party, the “strategic” nominations.

“Moon has no intention to step down from his chairman post right now,” the source said. “He will resign after the next general election.

“Moon wants Ahn and Park to have a three-way competition with policies in the next National Assembly,” he said.

While Park was generally open to the idea of the alliance, Ahn was pessimistic.

“The party has not been fully reformed, but they are talking about nominations already,” Ahn said. “It is lamentable. The opposition party’s role is crucial to improve Korea’s politics, but we are failing to do so.”

An NPAD official said Ahn and Moon met in May and agreed to form a trilateral alliance with Park, but Ahn abruptly changed his mind the next day. “Since then, the distrust between the two sides grew deeper. The situation showed no sign of improving,” he said.

“The most realistic plan to maximize the NPAD’s political power is a Moon-Ahn-Park alliance,” said Kang of Seoul National University. “Moon must find new faces to work with. For him to win an election and show a new appearance, he must change his people.”

Lee Cheol-hee, director of the Dumun Political Strategy Institute, also said a Moon-Ahn-Park alliance is the answer. “Right now, Moon and Ahn are both in need of a greater image. The people are paying attention to which one of the two will not be obsessed with small things and show some vision.”

The time has come for Moon to get over his bitterness about his presidential defeat, said Lee Won-jong, former political affairs senior secretary for the Kim Young-sam administration. “Moon earned [14.69 million] votes, which would have been more than enough to win the presidency in any previous election,” Lee said. “Perhaps because of that, Moon failed to escape from his fantasy of being the people’s choice. He must be awakened from that dream and have a new start.”