Gov’t sponsors battle of the drones

Gov’t sponsors battle of the drones 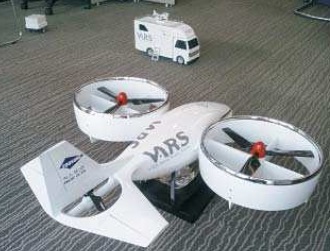 A robot with VTOL capabilities in development by the Ministry of Trade, Industry and Energy. The ministry aims to improve the speed of flight to a maximum 150 kilometers per hour (90 miles per hour) with flying time of over an hour. [MINISTRY OF TRADE, INDUSTRY AND ENERGY]

Drones are set to do battle at an upcoming event, with the winners receiving awards from the government.

The Ministry of Trade, Industry and Energy announced on Tuesday that it will hold “R&D Korea 2015,” where R&D projects in which the government has invested a total 3 trillion won ($2.6 billion) will be displayed.

The ministry’s investments have been allocated to projects in 13 categories related to futuristic engines.

To promote its efforts to develop robots with vertical takeoff and landing (VOTL) capabilities, a type of drone, the government is sponsoring several drone-related competitions at the event, which is taking place through Saturday at the Yangjae aT Center in Seoul. 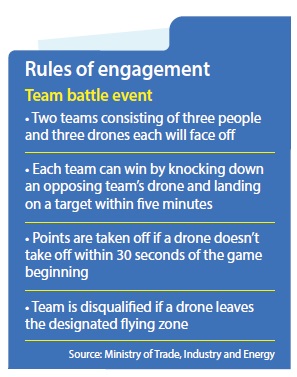 In the drone racing competition, the first person to fly their drone through a designated route wins. In the team battle, the first team to knock down their opponent’s drone and arrive at the goal point wins. Both will be recognized by awards from the ministry, and anyone with a drone worth between 100,000 won and 150,000 won can participate, including elementary school students.

The ministry is investing 9.8 billion won from the government’s R&D budget in developing VTOL technologies.

While models already on the market can only fly for a maximum 30 minutes, the newly developed drones are expected to be able to stay in the air for over an hour at speeds of up to 150 kilometers per hour (90 miles per hour).

Other developments in fields like health care robots and virtual reality devices will also be on display.