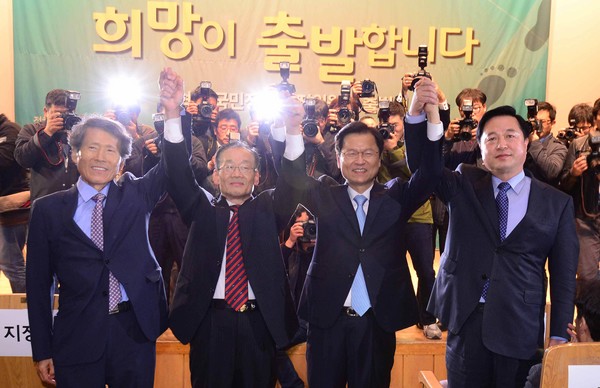 Attempts by former members of the main opposition party to create new parties have failed to impress liberal voters, a recent survey showed.

Over the past months, the New Politics Alliance for Democracy (NPAD) faced a growing number of defectors ahead of the April general election. The first threat came in March when Chun Jung-bae, a political veteran, left the NPAD to run independently in an April by-election in Gwangju. Chun successfully won a fifth term as a lawmaker and announced Wednesday a plan to launch a new political party.

Joining hands with about 30 former senior government officials, politicians, scholars and religious leaders, Chun will hold a launch ceremony on Dec. 13. His goal is to set up a central party organization in January.

Park Joon-yung, former three-term governor of South Jeolla, left the NPAD in July to create his own political party. The 68-year-old political veteran, who served as governor for three consecutive terms from 2004, is a loyalist of the late President Kim Dae-jung and served in his administration as the senior public affairs secretary and spokesperson.

Dozens of former officials of the NPAD abandoned the party in July to create a new party promising moderate, reformist politics. The group, known as the Age of People’s Hope, is composed of politicians mostly from Gwangju and the Jeolla region.

Kim Min-seok, a former two-time lawmaker defeated by Lee Myung-bak in the 2002 Seoul mayoral election, is currently heading the Democratic Party, which does not have a seat in the legislature. After declaring his return to the political arena in September, Kim said the NPAD has gone back to the ways of the Uri Party led by the late President Roh Moo-hyun. He vowed to establish a new political group to better represent the liberals.

Minor liberal groups also have a plan to create a new liberal political party before the end of this year. The Justice Party, Labor Party, Labor Politics Solidarity and the Kookmin Moim held a joint press conference in June to declare their intention to build a new party and criticized the NPAD for having failed to satisfy voters.

Chun’s new political party will have its basis in the Honam region, which includes Gwangju and North and South Jeolla provinces, but voters seem to be sticking with the NPAD. In Honam, Chun’s party scored 3.8 percent, while the NPAD scored 84.5 percent.

“Honam voters were worried that their votes will be split because of Chun’s new party and that united them behind the NPAD,” said Ga Sang-jun, a political science professor at Dankook University. “But if the Honam politicians inside the NPAD abandon the party en masse and unite, the situation can change.”

NPAD supporters, whether they live in Honam region or elsewhere, said they want current lawmakers representing Honam districts to be replaced. Of those polled, 82.9 percent said they want new faces to represent the region.

Despite concerns that the NPAD will suffer a major defeat in the next general election, 40 percent of NPAD supporters said the party will win more than 130 seats but less than a majority. As of now, the NPAD controls 127 seats in the 300-member National Assembly.

Another 26.8 percent predicted the NPAD will win more than 100 seats but less than 130.