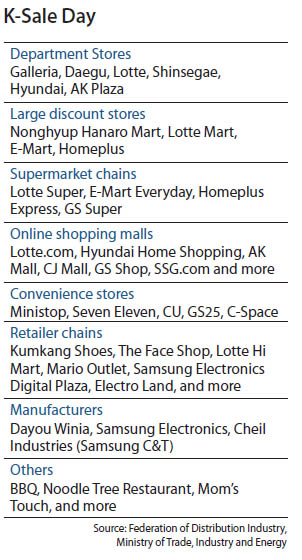 Shoppers are being offered another discount shopping event, called K-Sale Day, as retailers try desperately to maintain consumers’ buying sentiment through to the end of the fourth quarter.

The discount period will run from today until Dec. 15 at most department stores, large discount stores, manufacturers, traditional markets and supermarket chains, the Federation of Distribution Industry and the Ministry of Trade, Industry and Energy said on Thursday.

The K-Sale Day is a private sector-led annual discount event which was launched last year. The retailers’ association has extended the event period and expanded discount rates this year to persuade local shoppers - who are increasingly seeking cheaper prices on overseas online malls - to spend at home.

“Both local retailers and manufacturers have felt a sense of urgency as domestic consumers’ interest towards [buying from foreign online malls] grows during massive events like Chinese Singles Day last week and the upcoming Black Friday in the United States,” the federation wrote in a statement released on Thursday. “The month-long discount event is part of our voluntary effort to bring local consumers back to stores at home.”

Most of the discounts at the department stores, large discount chains and electronics retail chains are between 10 to 50 percent, slightly higher than the Korea Black Friday event early last month.

This year, more retailers in different sectors are taking part, with more products being discounted.

Samsung Electronics is expanding its regular end-of-year discount event until December and offering discounts on additional products, ranging from televisions, refrigerators, washing machines, kimchi refrigerators, air purifiers, computers, air conditioners and cameras. Discounts range between 20 to 40 percent. Cheil Industries is planning to offer discounts of up to 30 percent on its suit brands and casual brand Beanpole.

While the discount events and participation involve the private sector, the government said it injected 100 billion won ($86 million) to encourage consumers to go to traditional markets by offering traditional markets-only gift vouchers. The discounts start on Nov. 27.

The Korean retail industry’s inventory turnover ratio index, which supposes that the inventory ratio is at 100 points in 2010, reached as high as 120.8 points in June after the Middle East respiratory syndrome broke, according to Statistics Korea.

It gradually declined to 117.9 points in August and 114.5 points in September, thanks to events such as Korea Black Friday and the reduction in the individual consumption tax.