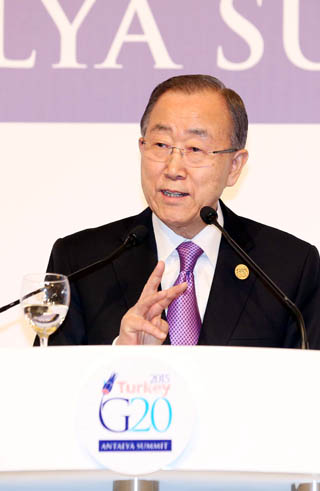 The United Nations acknowledged for the first time that there are ongoing discussions with Pyongyang about a visit by Secretary General Ban Ki-moon to North Korea.

In a briefing in New York on Wednesday, UN spokesman Stephane Dujarric did not elaborate on details or a timeline for a possible trip by Ban to Pyongyang. “Unless something is announced from this podium by myself or anybody else from my office who briefs - or obviously by the secretary general - the rest is pure speculation,” Dujarric said.

This is the first time the United Nations has acknowledged a trip is in the works after speculation all week about whether a visit by Ban would include a meeting with North Korean leader Kim Jong-un, who has spurned talks with other government leaders since he came to power.

South Korean Ministry of Foreign Affairs spokesman Cho June-hyuck said at a press briefing on Thursday, “On Secretary General Ban’s plans to visit North Korea, aside from the remarks made by the UN spokesman, there is nothing more we have to say on this.”

He evaded reporters’ questions on whether the South Korean government knew anything about the visit or could speak about it, repeating several more times, “We have nothing more to add than what was revealed by the UN spokesman.”

Two other UN secretary generals, Kurt Waldheim and Boutros Boutros-Ghali, visited North Korea, and both met with North Korean founder Kim Il Sung. If realized, Ban’s visit would be the first by a UN chief to North Korea in 22 years. Ban did visit Kaesong in 2006 when he was South Korea’s foreign minister though Pyongyang canceled another planned trip to the industrial complex in May.

Analysts said denuclearization and North Korea’s human rights situation would be the most pressing issues for Ban to raise if he meets Kim Jong-un.

But North Korea expert Cheong Seong-chang, a senior analyst with the Seoul-based think tank Sejong Institute, was wary about how much progress could be made by Ban’s visit. “North Korea and the United States have a huge gap in positions on the nuclear issue,” he said. “Washington believes that North Korea needs to take steps in order for talks to be reopened, while North Korea has proposed resuming the six party talks without any preconditions.

“If Secretary General Ban and North Korean leader Kim Jong-un meet, that will be a meaningful meeting in itself,” he said. “But under such circumstances, I think we shouldn’t expect too much.”

Pyongyang might seek to find a middle point on the issue, he said. “North Korea might agree to put off nuclear tests for several years, but they would propose something like this conditionally, and ask for simultaneously calling a halt to joint U.S.-South Korea military drills in exchange for temporarily halting nuclear or missile tests.”

Cheong added that “there is certainly a possibility that the North may request Ban to play a mediating role in creating a more conducive environment for talks with Washington.”

Regarding North Korean human rights issues, Cheong said it is unlikely that Pyongyang will take any meaningful measures. “But it is possible they may release South Koreans detained in North Korea with Secretary General Ban when he leaves.”

Cheong pointed out that if Ban doesn’t meet Kim Jong-un, he could hold talks with North Korea’s ceremonial head of state Kim Yong-nam, president of the Presidium of the Supreme People’s Assembly.

But conditions for a visit by the UN chief are better than ever, especially with Pyongyang’s change in focus to pursue economic development and shifts in diplomatic tactics.

“North Korea’s foreign relations have changed somewhat because in the past, Secretary Kang Sok-ju had a big influence on North Korea’s foreign affairs, but his health is not good,” Cheong said. “So that role has been taken over by Kim Yang-gon, [director of the United Front Department], who is more active about having meetings than Kang. This is more positive than before.”

The media has been speculating about various dates for Ban’s visit. “If an agreement is reached,” Cheong said, “there will be no difficulty for Ban going last-minute.

“And since someone practical like Kim Yang-gon is advising Kim Jong-un, there is the possibility that there may be more fruitful results than in the past.”