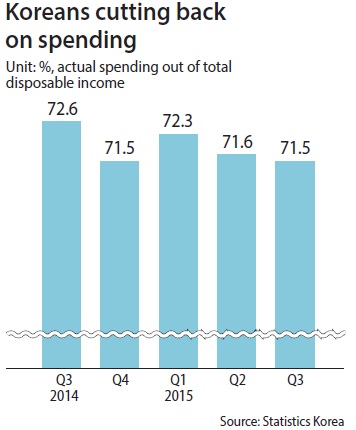 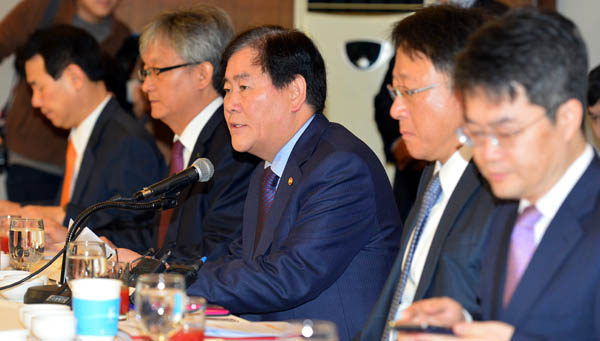 Deputy Prime Minister for the Economy and Finance Minister Choi Kyung-hwan, center, says Korea will be able to make 3 percent growth next year via domestic consumption and investment boosting policies, during a roundtable with heads of 11 economic research institutes held at the Press Center in central Seoul on Friday. [NEWSIS]

Deputy Prime Minister for the Economy and Finance Minister Choi Kyung-hwan said big breakthroughs in the global economy can’t be expected next year, but 3 percent growth is possible through stimulus of the domestic economy during a closed-door roundtable with heads of 11 economic research institutes in central Seoul on Friday.

“I think Korea will be more than capable of fulfilling 3 percent growth in 2016 if we continue the domestic economy-oriented recovery momentum by active policy initiatives like the supplementary budget,” Choi said, mentioning that Korea’s third-quarter gross domestic product hit a five-year high in terms of quarter-to-quarter growth. Domestic consumption recovered to a level before the Middle East respiratory syndrome outbreak, and housing transactions are also on rise, he said.

Choi acknowledged that “uncertainties in the global economy are worrisome, including G-2 risks [the U.S. Fed’s raising of interest rates and the Chinese economy’s slowdown], a slowdown of emerging economies after the fall in raw materials prices, and the threat of terrorism.” He vowed that the government will continue expansionary and deregulatory policies to open up business opportunities for the private sector.

Choi and the research institute heads agreed the government should maintain expansionary fiscal policies next year, said Lee Chan-woo, director general of economic policy at the Finance Ministry, during a press conference after the meeting.

Another point brought up was to accelerate industry-wide restructuring and an overhaul of highly indebted “zombie” companies, Lee said.

The Organization for Economic Cooperation and Development predicts that Korea will grow at 3.1 percent next year, and the Bank of Korea expects it to be in the low 3 percent range.

Unlike the rosy picture painted by bureaucrats, however, some analysts expect significantly less.

The global ratings firm Moody’s released a 2.5 percent growth forecast earlier this week. Nearly 90 percent of Korean conglomerates also expect that Korean growth will linger below 3 percent, according to a survey done earlier this week by the Federation of Korean Industries, the largest business lobbying group in Korea.

Third-quarter household consumption, which was also announced on Friday, was more evidence of a struggling domestic economy.

Household consumption shrank by 0.5 percent year on year to post average monthly consumption of 3.39 million won ($2,930). It was the first time in two and a half years that consumption shrunk.

With tight budgets, Korean households showed a consumption propensity of 71.5 percent, a record low since Statistics Korea started compiling the data in 2003.

Meanwhile, Bank of Korea Gov. Lee Ju-yeol commented that a ripple effect from the Paris attacks have yet to be felt at a meeting with CEOs of local commercial banks on Friday.

“The Paris incidents may bring limited negative influence on the Korean economy,” Lee said, “but we don’t have to worry too much because the economy has a current account that has remained in surplus for a long time, and stable fiscal, financial and foreign exchange bases.

“However, we have to keep our eyes on the overall global economy, particularly how the remaining threat of terrorism may shrink other countries’ [investment and consumption] sentiments, and the already-weak economic recovery in the eurozone,” Lee added.