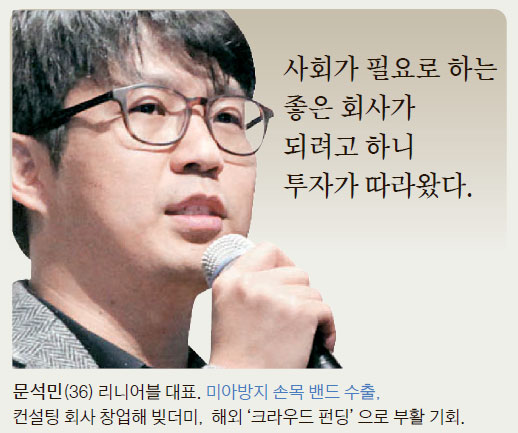 Before the success of Pororo, Choi was considered a serial flop maker. All of his first five animation ideas flopped at early stages.

During a public forum, or “talk concert” to use the Korean term, Choi spoke on the passion of start-ups to 400 people planning to start their own companies at the Korea Chamber of Commerce & Industry’s headquarters in central Seoul on Wednesday.

At the event co-hosted by the business lobbying group and the Ministry of Trade, Industry and Energy, Choi said that when he continued to fail in the animation business, which was considered a dying industry anyway, everyone around him was making fun of him. 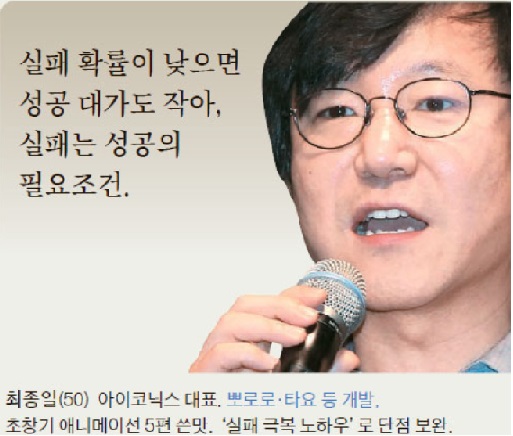 “I tried to overcome fear by realizing that if the possibility of failure is low, then the rewards from success aren’t likely to be very big,” Choi said. “After repeated failure, I started to think from a different angle and started to analyze the vulnerabilities of [successful] Japanese companies. I found that my answer lay in toddlers.

“I studied the characteristics of children under 3 years old, and that was how Pororo was created.”

Moon Seok-min, the 36-year-old CEO of Lineable, which develops smart wristbands that track the location of children to prevent them from getting lost, was also a speaker at the forum. He talked about success that was built on failure.

Moon was a researcher at the country’s largest IT company, Samsung Electronics. In 2012, he set up a consulting firm. By last year, he saw his debt pile up to 500 million won, and people started advising him to file for bankruptcy and go back to a salaried job at a company.

However, he restlessly looked for new business items.

“And then one day, I came up with the idea of developing an app that would sound an alert when a child with a band on his or her wrist would wander out of a given area,” Moon said. “Because the cost of development and human resources was large, there weren’t any investors that would join in.”

As a last straw, he turned to crowdfunding and succeeded in raising 125 million won.

“You have to have a purpose beyond making money,” Moon said, “so that you won’t turn your back when faced with challenges.”

Korea Business Angels Association Chairman Ko Young-ha said as we enter an era of a rapidly aging society, there is greater need for everyone to have the mentality of entrepreneurs.

“Our lives after retirement aren’t guaranteed, and many think of starting their own businesses,” Ko said. “The mentality of entrepreneurship can only blossom when we know what we want and have good discipline from a very young age.”

On the same day and in the same venue, another conference was opened that focused on industry convergence.

KMW Chairman Kim Duk-yong said his company developed a solution that applies a next-generation telecommunications system on lamps along roads. “Through conversion of industries and different fields, we can create new businesses that also result in more efficient spending of the government’s budget.”