My tears after Chun’s gang calls me corrupt

My tears after Chun’s gang calls me corrupt 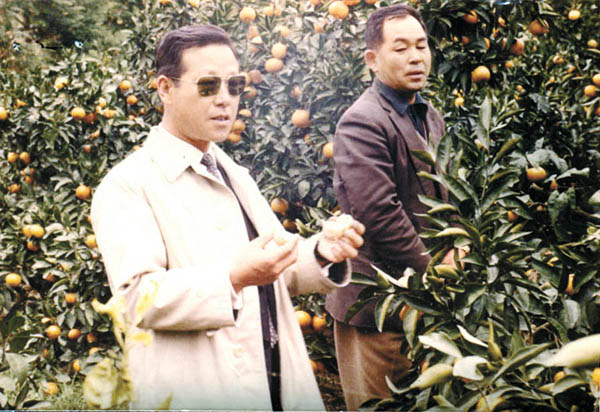 Kim Jong-pil visits an orchard on Shikoku Island, Japan, in November 1968 to learn about the tangerine farming for his orchard on Jeju Island. [Kim Jong-pil]

During my 46-day confinement at the Army Security Command in 1980, only once did I cry. It was after I heard the news that the security command had announced in corruption charges that I had illegally accumulated 21.6 billion won ($18.6 million). A number of my assets were to be confiscated included a tangerine orchard on Jeju Island and a cattle ranch in South Chungcheong that I had donated to the Unjong Scholarship Foundation. I could not keep myself from crying after learning of the Chun Doo Hwan group’s perfidy. During my lifetime, I shed tears just a few times. I cried at the funeral for President Park Chung Hee in 1979. Recently, I cried when my wife Young-ok passed away.

I shed tears in the interrogation room 35 years ago because the Chun group took away my dreams and ambition. Though 35 years have passed, I feel compelled to raise the issue in regard to the Unjong Scholarship Foundation. In May 1968, I declared my retirement from politics and relinquished all formal positions. I was determined to contribute to the improvement of the country through other means. I remembered a line from a book on Napoleon that I had read in middle school. The Duke of Wellington, who defeated Napoleon in the battle of Waterloo, was asked how he had beaten the French emperor. He said he had fought in the spirit of Eton College and the victory was possible because of what he had learned on that school’s playing fields. His remark inspired me deeply and led me to nurture ambitions that I would one day set up a school just like Eton.

To set up an educational institution, I needed financial means. So I decided on a pioneering farming venture. In June 1968, I visited a vast track of land in Seogwipo, Jeju Island, and decided to turn it into a tangerine orchard. Agricultural experts told me I would fail and said the land was not suitable to such farming. But I pushed ahead. I bought 430,000 square meters of land for 32.5 million won. The price was very cheap because everyone thought the land was infertile. I deployed a crane and even dynamite to break through rock. I set up a tent nearby and spent the whole winter of 1968 there. I purchased 49,840 tangerine seedlings from Japan and planted them. About three years later, they bore fruit. 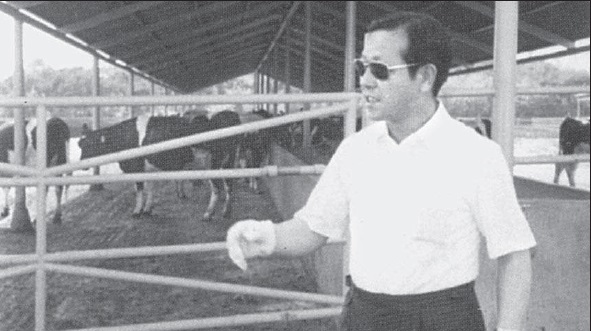 Kim Jong-pil watches cows at the Seonsan ranch in South Chungcheong on his summer vacation in August 1973. [Kim Jong-pil]

In the first few years, I faced some unexpected challenges. Trees planted along a stone wall died. An expert told me the wind blowing over the land would drop salty elements after hitting the wall. So I planted arborvitae in between the wall and the tangerine trees.

President Park Chung Hee paid a visit to the orchard in February 1972 and was delighted. “You did something here,” he said with a smile. He hand-wrote me a message saying that 100 million tangerines would be grown for the sake of the people.

Tangerine orchards started popping up all over Jeju and tangerines became one of the most common fruits on the island.

And here I was, almost a decade later, locked in a cell and branded as a corrupt politician who set up that orchard with dirty money.

I wondered if the Chun military group had any idea of how to serve the people. In addition to the Jeju orchard, I also set up a cattle ranch in Seosan, South Chungcheong. It was President Park who convinced me to pioneer the ranch project. After a presidential trip to Australia and New Zealand, he encouraged businessmen to launch cattle businesses. But no one dared because of the challenges involved. I felt compelled to follow through on his direction.

I found a 6.4 million square meter plot in Seosan and purchased it for 20.4 million won in installments over six years. I unloaded truck-loads of lime to neutralize the land’s acidity. The plot looked as if it was covered in thick snow. I ordered grass seeds from Italy and purchased calves and cows from Australia. Raising cows was a tough job but also surprisingly pleasant. To see how they would hold up through the cold winter, I monitored them from a nearby farmhouse. I also helped deliver calves.

By the end of 1979, the number of cows on the farm increased to 1,339 and businessmen in the country flocked to the site to learn how to set up their own ranches.

When the Chun Doo Hwan group expropriated the Jeju orchard and the Seosan ranch, they did not belong to me personally. I donated them to the Unjong Scholarship Foundation, which I set up in 1974 when I was prime minister. I stipulated in the foundation’s regulations that a donor to the foundation would be banned from its management to ensure its independence.

It was managed as a non-profit organization. Over a five-year period, the foundation was able to give scholarships worth 267 million won to a total of 679 university students nationwide. My dream of establishing a Korean Eton was coming along.

But then Chun’s group accused me of corruption for running the Unjong Scholarship Foundation. The Chun group claimed the tangerine orchard on Jeju was worth 2.8 billion won while the Seosan ranch was worth 7.9 billion won. Years later, many people told me that I should try to take back the two properties. They said there must be a legal way to reclaim them since they were wrongfully seized by the Chun group.

But I didn’t sue. I thought no matter who owns them now, they belong to the country. Of course I do feel a deep sense of regret over the loss of the orchard and the ranch as I was involved in bringing them into being. But I feel I have done my part as they are now contributing to the good of the nation.

At the end, what I want is an explanation from Chun Hoo Hwan as to why he branded me as corrupt. I have lived 89 years with high ethical standards. I never sought any personal gain. Over the past 35 years, not a single apology has been made by Chun. The time has now come for him to clarify the matter. It has been a long time since he stepped down from power.