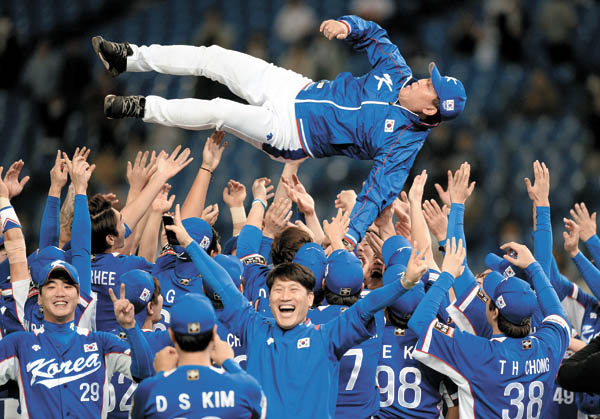 Korea national baseball team manager Kim In-sik is tossed in the air by players celebrating their win in the Premier 12 baseball tournament on Saturday at Tokyo Dome in Tokyo. Korea beat the United States 8-0 in the final and became the inaugural champion of the World Baseball Softball Confederation competition. [NEWSIS]

When Kim In-sik took the job of managing Korea’s national baseball team for the Premier 12 tournament, he knew the team would have a difficult time and could only dream they would actually become champions.

For Kim, who previously led Korea in two World Baseball Classics (2006, 2009), the Premier 12 was a headache from the start because he had the problem of forming a 28-man squad with a dearth of quality pitchers who were out due to various injuries or dropped from the squad due to illegal gambling charges.

“I had big concerns in forming this national team,” Kim said. “I had to switch about 10 players from my initial plan.”

But the worries evaporated and his dream became a reality on Saturday when his team, ranked eighth in the world, beat the world No.2 United States 8-0 in the final.

The team had rough start - losing 5-0 to Japan in the opener on Nov. 8 - and went through various problems on-and-off the field.

Even in the final game against the U.S. at the Tokyo Dome they were put in an uncomfortable position as an American was third base umpire. In the semi-final against Japan on Thursday, the linesman was Japanese.

Korea started the rally with leadoff Jeong Keun-woo, who hit a single in the first inning and later stole second. He later scored the games’ first run with a double by Lee Yong-kyu to right-center.

In the top of the third, Lee Yong-kyu drew a walk, and Kim Hyun-soo sent a double to deep right-center for Korea to make the score 2-0 and pulled U.S. starter Zack Segovia from the mound.

In the fourth, Kim Hyun-soo hit another double from American relief Brooks Pounders when the bases were loaded to double Korea’s lead to 4-0.

With two men still on board, Park Byung-ho blasted a home run to left field to give Korea a 7-0 lead. Korea scored their final run in the top of the ninth when Jeong Keun-woo drew a bases-loaded walk off Casey Coleman.

On the mound, lefty starter Kim Kwang-hyun made up for his previous performance in the Premier 12. Against Japan and the U.S. in the qualifying rounds, he didn’t pitch more than five innings and recorded a 5.14 ERA. But on Saturday, Kim shutout American batters for five innings with five strikeouts and no base-on-balls.

It was also a sweet revenge for Koreans who lost 3-2 in the tournament’s qualifying round on Nov. 14.

“Since the United States was strong in the qualifying round, we had to be more focused,” manager Kim said. “The dramatic win over Japan in the semi-finals boosted the team atmosphere in the final as well.”

Players on Saturday didn’t celebrate loudly or wave the national flag as they wanted to show respect to their opponents. “This is Japan and we don’t want to make controversy and provoke Japan which will be still upset about its loss,” said team captain Jeong.

Manager Kim said that though their victory is remarkable, there is still room for improvement. The 68-year-old said Korea should produce pitchers like Japanese ace Shohei Otani, who shutout Korean batters in 13 innings by getting 21 strikeouts and allowing only three hits in two games.

“I always envy the level of Japanese pitchers, and am also impressed by American outfielders who have strong shoulders,’ Kim said. “We should have a systematic plan not only on how to pitch the ball, but also how to build strong stamina.”

Kim, who won his first international title since a gold medal in the 2002 Asian Games, hinted that this would be the last time he will manage the national team. “We should have a full-time manager who can focus in the national team,” Kim said. “I hope young managers and the local baseball community will have a discussion on how to lead the team in the future.”