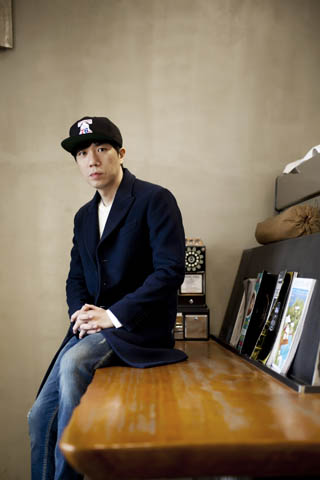 
The plot of “Words We Like to Hear” is pretty simple.

It is about a male protagonist getting to know a woman named Kim Jung-hee after meeting her on a blind date.

But the events that follow in the book are far from simple.

The woman, who is a successful doctor, has a pretty face and owns a Porsche. In return for agreeing to date the man, she sets some strict rules: He can never call her first, they can meet only when she is available and he is not allowed to give his heart fully to her.

However, despite these miserable conditions, the man agrees. The book goes on to show how one person can become so helpless in the face of love, in addition to showing how even someone in a relationship can be utterly lonely.

The easygoing style of the writing lures in the readers, making them cry and laugh along with the protagonist as he continues to see the woman.

The book, which was published in September, immediately made the best-seller list and has been there for two months.

The JoongAng Sunday recently met the author, Lee Seok-won, who is known for keeping a low profile. The 44-year-old is also the vocalist in the three-man indie band Sister’s Barbershop.

Q. The structure of the writing is pretty unusual. It is an essay, but it has a formal structure and also a major turnaround at the end. Why did you categorize it as an essay?

A. Because although it looks like a novel, it’s not. For example, a novel needs to have the right sentence structure appropriate for the genre. Sentences that just say, he did this and she did that, don’t make this book qualify as a novel. I wanted to write it free of any formats or rules.

You must receive many questions about who this woman Kim Jung-hee is. Is she a real person?

Basically, I believe what happens in the book should stay in the book. I think it is inappropriate to give out the answers. I wrote it free of any restrictions, so I would like the readers to read it as they would like and feel what they feel is right. I believe respecting such imagination and judgement is the way to not intrude the readers’ sentiment.

Why do you separate your identities as a singer and a writer so strictly?

Before writing my first book, I pledged to myself that I would write as a writer, not as a musician. For example, see how people perceive Kim Chang-wan [the vocalist for the popular band Sanwoolim] as an actor. He has been acting for 30 years, but people don’t really see him as an actor. I knew that first impressions are hard to change, so I was pretty sensitive about that. Thankfully, people are accepting me as a writer faster than I expected.

Does writing lyrics differ a lot from writing books?

They are two totally different things. Writing lyrics feels much harder for me as well. Delivering words through melody is truly challenging, and hangul is not exactly the most apt language for it.

Then are you not going to produce any more albums?

I am working on my last full-length album. I have been doing it to earn my living for the past 20 years, but I don’t think I am that good at it. Since making songs is confined to what age range you are in, I am going to stop doing music next year. No more new albums are planned.

You identified yourself as an “age explorer.” How do you feel about your age now?

I think people these days worry about similar things whether they are in their 20s, 30s or 40s. They are anxious. Take me for example: I don’t know what I would do if this book had failed. Nothing is certain. But if I would, against all odds, say something positive about my age, I would say it is that a lot of experience results in a relaxed mind. When I was young, I wanted something grand, but now I know how to appreciate even the trivial things.