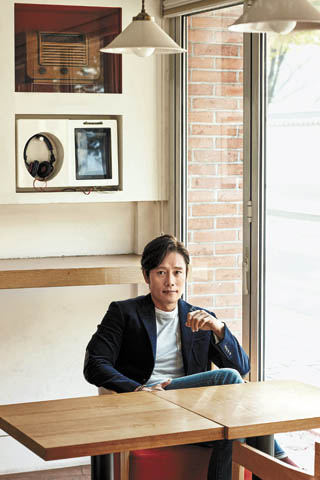 In an interview with the JoongAng Ilbo, actor Lee Byung-hun talks about his role in the film “Inside Men” and in the upcoming Hollywood projects “Beyond Deceit” and “The Magnificent Seven.”

Despite being embroiled in a blackmail scandal last year, none of it seemed to matter at the first screening of “Inside Men,” directed by Woo Min-ho. The audience exploded with words of admiration, exclaiming, “That’s our Lee Byung-hun.”

From “Joint Security Area” (2000, directed by Park Chan-wook) to “Bungee Jumping of Their Own” (2000, directed by Kim Dae-woo), Lee, 45, has demonstrated throughout his 24-year-long acting career his ability to take any type of role and perform with finesse. Lee triumphs once again in his role as Ahn Sang-gu, a betrayed political henchman who plans revenge against his former allies in “Inside Men.” Since he spoke in a rural dialect and had to use his non-writing hand - his character loses his right hand - the film presented unique challenges for Lee.

Sang-gu is a multifaceted character with small-town upbringing and a merciless desire for revenge. In one moment, he dons a classy suit and tie, and in the next shamelessly gobbles up side dishes with his fingers. It is hard to resist his quirks and charm. 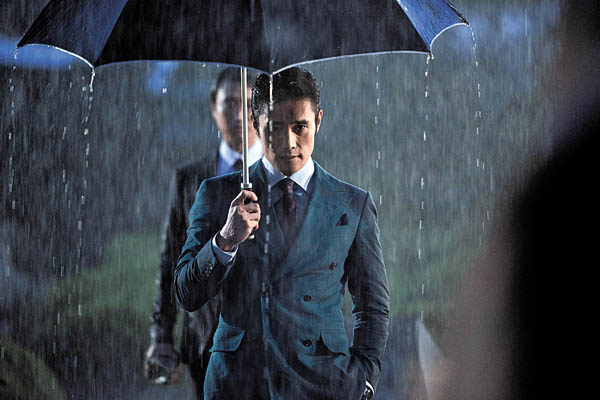 Lee plays Sang-gu, the main character of the thriller movie “Inside Men.” The film was released on Thursday and took the top slot in the weekend box office. [Showbox]

In an interview with JoongAng Ilbo, Lee discusses in detail about his role as Sang-gu, as well as learning and understanding people in the film and beyond. The following is an edited excerpt.

Q. Sang-gu is a comical character. Was it your idea to portray Sang-gu in this way?

A. My standard for choosing a film to work on is always enjoyment. From the very moment I start reading the script, I must be fully immersed in the thrill that comes along with imagining the scenes in action. My heart needs to pound drastically as I envision myself in my given character. That way, the genuine sentiments I feel will carry through when acting on screen. If I have yet to fully digest the makeup of my character, I need the motivation to seek change, whether by taking the initiative to alter my character or by seeking guidance from the director.

When I first read the script [for “Inside Men”], it seemed to me that Sang-gu lacked some dimension in his personality. It didn’t make sense to portray Sang-gu as a bad guy flat out. Wouldn’t it be better to humanize this character, to show the audience he is still human, like us? I thought that Sang-gu would be more credible and identifiable if there were even a small human touch to the character. Director Woo gladly took my suggestions.

On the surface level, Sang-gu is a type of character that has emerged in several Korean movies. Yet he shines through as a unique role thanks to the meticulous acting. It’s also been noted that this film had numerous ad-libbed scenes.

I was always on ready mode because it was hard to tell who would throw in an ad-lib and when. When Inspector Woo Jang-hoon (Cho Seung-woo) calls Sang-gu, “You dirty crook!”, that was an ad-lib on Jo’s part. As we were trying to keep up with each other’s level, the language got a bit stronger. There was even a moment when I was dumbstruck after Inspector Woo says to Sang-gu, “Your face looks like s---.” At those kinds of moments, the answer is to be as Sang-gu-like as possible. “Let’s go to mojito to drink Maldives” is a line of Sang-gu’s that I ad-libbed (laughs). I tossed in that expression impromptu, but the reaction was better than I had thought.

The turning point of the film is when Sang-gu, who, after being betrayed unexpectedly by his former allies, resolves to get vengeance. In retrospect, it seems that you have played many characters who fall victim to others, whether men or women. Most exemplary is your role as Kim Sun-woo in “A Bittersweet Life” (2005, directed by Kim Jee-woon), who shows unshakable loyalty to his mob boss but in the end is left abandoned.

To be honest, I myself used to trust people too easily and get hurt too easily as well. After many trials of trusting and being hurt, at some point I started trusting people a lot less. It got to the point where I isolated myself from everyone because I couldn’t trust people.

How did you recover?

I’m not the type to retaliate like Sang-gu. I’m the kind who just turns away when someone bothers me. I’d rather try to forgive and forget.

The betrayal? Or the person?

I think that depends on the level of betrayal. No matter what the circumstances are, I try not to lose my grip. It would be impossible to live forever without trusting anyone.

Last year, you were involved in a scandal that involved two women who attempted to blackmail you. As result, the public seems to have come to view you in a negative light. You must have felt additional pressure to regain the public’s trust.

The only thing I could do at this point was to give my acting its best shot. As the controversy erupted during the filming stage of “Inside Men,” I performed as best as I could so that the scandal would have no negative impact on the movie. There was no other way to handle the situation.

You recently completed “Beyond Deceit,” directed by Shintaro Shimosawa and slated for theatrical release in March 2016. For this film, you play the role of an accountant and engage in dialogues with characters played by Al Pacino and Anthony Hopkins. Are you finally dropping your guns and swords in favor of Hollywood films?

Unfortunately, I am still waiting for the point in my career when I can choose which Hollywood films I want to work on. That said, I’m grateful that I’ve grown out of playing only roles typical for Asian actors in American films and can now get offers for roles that are equally suitable for my American counterparts. This goes to show that the film producers seek me not because of my racial identity, but because they need Lee Byung-hun. And, who knows, maybe it won’t be long before I can choose the films as I want.

People are also as eager to see your performance in the remake of “The Magnificent Seven” (1960, directed by John Sturges). The newest version is being directed by Antoine Fuqua, well-known for his work in the crime-thriller genre, and includes a vast range of stars including Denzel Washington, Ethan Hawke and Chris Pratt.

I remember watching the original movie when I was very young. I reprise the role of the swordsman Britt, which was originally played by James Coburn. Other than the sword skills, the character is treated completely different in this production. Based on some rough cuts I saw in spare moments from filming, the remake is a lot more dramatic than the original.

Director Fuqua is absolutely brilliant. I’m also a huge fan of his work, “Training Day” (2001), which starred Washington and Hawke. Recently, the cast and crew of “The Magnificent Seven” were invited to an exclusive screening of Fuqua’s “Southpaw” (to be released in December). I enjoyed watching the film very much.

The word is that, back when you were making your Hollywood debut, you tended to steer clear of people who might try to strike up a conversation with you. It seems the Hollywood scene has grown on you.

Rest assured, that timidness remains the same (laughs). But for “The Magnificent Seven,” it was easier to break down the barriers due to the obstacles and ordeals we had to go through altogether during the project. We filmed in the middle of summer at Baton Rouge, Louisiana, which is the hottest spot in the U.S. A typical day constituted the highest temperature exceeding 40 degrees Celsius, and humidity over 90 percent. Given that you would already be drenched in sweat after being outside for only 10 minutes even at 6 a.m., to slip on a vest, ride a horse and do action scenes seemed almost impossible. We had to delay filming for a month due to excessive rain, and the seven actors stuck with each other throughout. It was the optimal conditions for friendship to blossom.

This already marks the sixth time that you’re appearing on Hollywood film. Has your Hollywood experience made an impact on your acting career in any way?

In terms of language and cultural barriers, there is some frustration I feel in my inability to behave or express myself as freely in Hollywood films. Yet, I don’t believe that has much of an impact on my acting. No matter what, I don’t think I should allow my acting to be easily affected by such a factor. The reason that I choose Korean films is first and foremost for the enjoyment. Just as the movies I watch need to be enjoyable, the movies I work on must be enjoyable. That will never change.

It seems that you’ve almost reached the pinnacle of your acting career, given the accumulation of experiences and acclaim. Is any there anything left that you still want to pursue as an actor?

As I grow older, I have begun to cultivate a deeper understanding of each and every character that I get to play. In my earlier days, I didn’t fully address these inquiries and acted a bit too roughly. As I was looking at my character from a distance, it was harder by that much to make that character mine. So the more I act, the more deeply I get into analyzing and understanding my characters. While the final theatrical version of “Inside Men” runs 130 minutes, the uncut version, which runs almost 4 hours, contains my unbridled ambition to act out all I invested in my character and the film overall. If the movie becomes a success and is able to be released as an extended director’s cut, I could not ask for anything more.