Condolences pour in from Clinton, Murayama

Condolences pour in from Clinton, Murayama 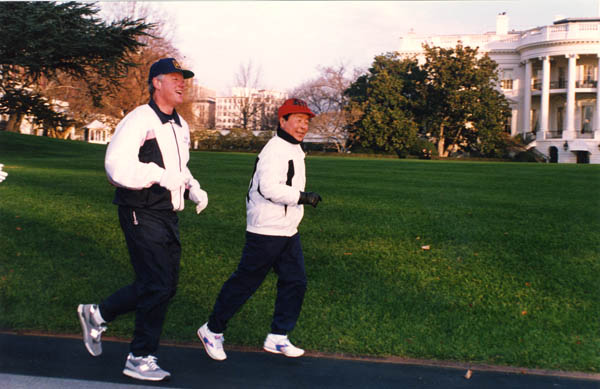 President Kim Young-sam, right, and U.S. President Bill Clinton are jogging together at the South Lawn of the White House on Nov. 24, 1993. [JOONGANG PHOTO]

The international community, including former U.S. President Bill Clinton, expressed condolences for the death of former President Kim Young-sam, who died in a hospital in Seoul Sunday at the age of 87.

“I join the people of South Korea in mourning the loss of President Kim Young-sam, whose vision and sacrifice helped his nation fully realize its democratic destiny,” said Clinton, whose term overlapped with the Korean democracy icon, in a statement.

Early in their terms, Clinton and Kim faced escalated tension from North Korea after Pyongyang decided to withdraw from the Nuclear Non-proliferation Treaty in 1994.

Sometimes they didn’t see eye-to-eye and Kim fiercely lobbied against a possible U.S. attack on North Korea’s nuclear complex in 1994.

But between heavy talks, Clinton and Kim became jogging buddies at the Blue House during their first summit in Seoul in July 1993 then at the White House in November later that year. Kim was known for his penchant for jogging in any kind of weather.

“I was proud to work with President Kim to deepen the partnership between the United States and South Korea and promote regional security and cooperation,” Clinton added, “and I’ll never forget his hospitality during my trip to Seoul in 1993.”

Kim, a native of South Gyeongsang known for his bluntness, served as the first elected civilian president of Korea from 1993 to 1998 following decades of military rule.

White House press secretary Josh Earnest conveyed “heartfelt condolences to the people of the Republic of Korea” on the behalf of the American people in a statement.

Tomiichi Murayama, who served as Japanese prime minister from 1994 to 1996, expressed his condolences and described Kim as “the most needed and fitting president for Korea at the time.”

Murayama added that even after he stepped down from office, he visited Kim’s residence and maintained a personal relationship.

It was during the administrations of these two leaders that Murayama issued his landmark statement of Aug. 15, 1995 in which he expressed his “heartfelt apology” for Japan’s colonial rule and wartime aggression.

Taiwan’s Ministry of Foreign Affairs relayed in a statement that President Ma Ying-jeou, Premier Mao Chi-kuo and Foreign Minister David Lin expressed condolences over the death of Kim, calling him “a great friend of the Republic of China.”