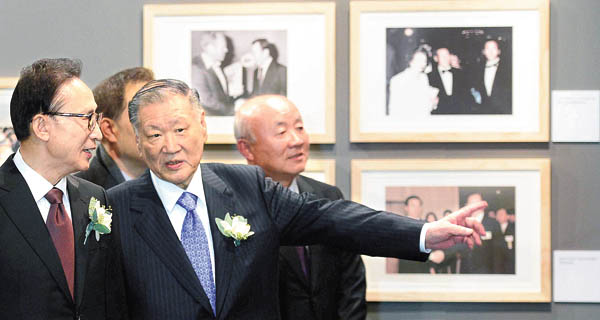 High-profile members of the political and business worlds joined family and friends on Tuesday at a special ceremony celebrating what would have been the 100th birthday of late Hyundai Group founder Chung Ju-yung.

Family members, including his second-oldest son Chung Mong-koo, the chairman of Hyundai Motor Group, as well as the late founder’s daughter-in-law and Hyundai Group Chairwoman Hyun Jeong-eun, were joined by former Hyundai Group employees such as former President Lee Myung-bak, who served as CEO of the construction arm before joining politics in the early 1990s, as well as notable politicians, government officials and leading businessmen.

JoongAng Media Group Chairman Hong Seok-hyun was among the 500 people at the ceremony.

Most celebrated the aggressive entrepreneurship of the late founder, who never settled for less and always pushed the limits of employees with his famous quote, “Have you even tried?”

“[Chung Ju-yung] was the first to start a company that manufactured large-scale and heavy products in a country, which [at the time] was relatively a barren land, and he was also the first to break into the overseas market,” said former Prime Minister Chung Hong-won, who headed the committee preparing Tuesday’s ceremony. “He was a pioneer of the Korean economy.”

Chung said the quality of the late founder in never fearing failure and his unyielding attitude toward challenges will be a huge guideline for the future.

“His sparkling creativity, adventurous challenges and an absence of fear towards failure that finally resulted in achievements are pioneering spirits that even resonate today,” Lee said.

During the ceremony, video clips of interviews with Chung Ju-yung were shown.

In an interview, the late Hyundai Group chairman said failure was not in his dictionary and that while he was alive and healthy, even if there were adversities, there would be no failure.

Some of the people who were close to the business tycoon showed his softer side.

Park Dong-kyu, honorary professor at Seoul National University, remembered a poetry meeting he had with Chung Ju-yung some 30 years ago.

“He showed that he was a man who was honest and a straight shooter,” Park said. “I remember how he mixed with poets.”

The late founder’s second-oldest son, Chung Mong-koo, said when looking at all the achievements his fathers has made, he has infinite respect.

“I will pour all my efforts into inheriting my father’s will and teaching in helping the Korean economy leap forward in becoming the center of the global economy,” Chung Mong-koo said.