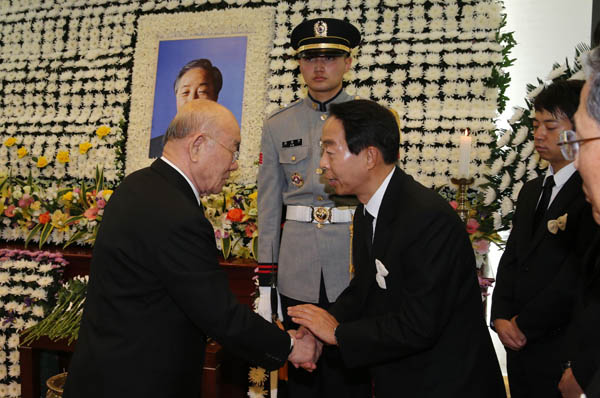 Chun visited the mourning altar at Seoul National University Hospital Wednesday afternoon escorted by two bodyguards. In the guest book, Chun wrote, “May the deceased rest in peace,” and signed his name without using any title.

After paying respects at the mourning altar, Chun sat down to talk with the late president’s second son and expressed his condolences. He stayed for about 10 minutes.

After Kim died Sunday, Chun issued a brief statement to mourn his death. “He must be in a better place now, as a devout Christian,” Chun said in the statement.

Kim dedicated most of his political life to fight the two military strongmen who ruled Korea, Park Chung Hee and Chun. Park ruled the country from 1971 till his assassination in Nov. 14, 1979 and Chun from Dec. 12, 1979 to 1988, both with iron fists. Only 10 days after his inauguration as president in 1993, Kim took bold steps to clean up the legacies of military dictatorship. Kim disbanded the Hanahoe, or Group of One, a fraternity of elite military officers headed by Chun.

Chun and Roh Tae-woo, Chun’s successor and Kim’s predecessor, were put on trial in 1996 over Chun’s military coup on Dec. 12, 1979, the Gwangju massacre of May 18, 1980, and both presidents’ uses of large “slush funds,” off-the-books money donated largely by industrialists.

During Kim’s presidency, the two former presidents were convicted of various crimes. Chun was sentenced to death, while Roh was sentenced to 22 years in jail. On Dec. 1997, Kim granted them special pardons for the sake of “grand national unity.”

Speculation was high that the two former presidents wouldn’t visit the mourning altar given their history with Kim. Roh’s elder son, however, paid a visit earlier Wednesday on behalf of his father, who has health problems, and Chun came in the afternoon.

Meanwhile, President Park Geun-hye may not be able to attend the funeral for former President Kim Young-sam, scheduled for this afternoon, due to her health condition, the Blue House said Wednesday.

“As the president went through many summits and diplomatic events during her recent trip, she needs to improve her health condition,” Jung Youn-kuk, presidential spokesman, said Wednesday.

Park’s schedule for Wednesday was cleared so the president could rest.

Park left the country on Nov. 14 to attend a series of multilateral conferences including the Group of 20 Summit for 10 days. She traveled to Turkey, the Philippines and Malaysia during the trip. Park came back to the country early Monday morning. After a brief rest, Park visited the mourning altar of the late president, who died on Sunday, to pay her respects.

On Tuesday, she presided over a cabinet meeting. She commented during the meeting, “There were many difficulties including my health to handle tightly scheduled events during a short period of time.”

The funeral ceremony for Kim will take place on the front lawn of the National Assembly at 2 p.m.