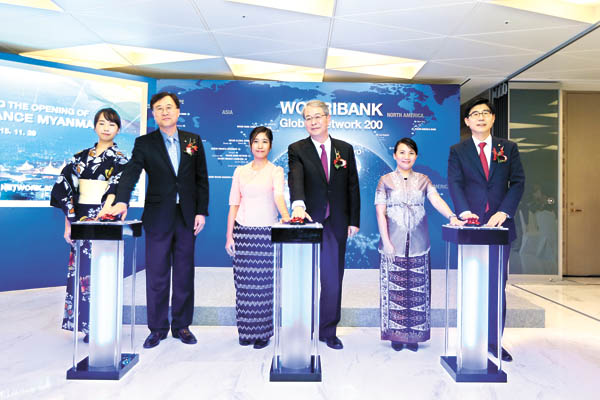 From left to right, Gwak Bum-gook, president of Korea Deposit Insurance Corporation, Yim Jong-yong, chairman of the Financial Services Commission, and Lee Kwang-goo, president of Woori Bank, celebrate the opening of the 200th branch in Myanmar at the bank’s headquarters in central Seoul on Thursday. [WOORI BANK]

Woori Bank opened its 200th overseas branch in Myanmar on Thursday and became the first Korean commercial bank to have 200 branches outside the country.

The bank was approved by the Myanmar financial authority in September to launch Woori Finance Myanmar, a microfinance-focused branch.

It took 48 years for the bank to have 200 overseas branches since it went global in 1968 as the first Korean bank to open a branch in Tokyo.

“The financial authority will actively support Korean banks to go abroad,” said Yim Jong-yong, chairman of the Financial Services Commission at a ceremony held at the bank’s headquarters in central Seoul on Thursday.

“As the financial paradigm is changing towards low interest rates and aging, banks need to find new sources of profit outside the country.”

As interest rates languish at record low levels and profits erode, struggling Korean banks at home are pinning their hopes on Southeast Asia, the fastest-growing area in the Asia-Pacific region.

The economies of Southeast Asia are expected to maintain GDP growth in the neighborhood of 6 percent for the near future, giving Korean banks a new chance to expand their businesses.

“The 200th branch is a product of our bank’s new global expansion strategy considering differing financial conditions form country to country,” said Lee Kwang-goo, bank president. “The bank plans to have 300 overseas branches by 2016 and 500 by 2020 with an aim to become one of top 10 Asian banks and top 50 in the world.”

Woori Bank plans to further expand its global network into Vietnam, India, the Philippines and Cambodia next year.

Last July, Woori Bank acquired Malis, a microfinance business in Cambodia. In the Philippines, the bank has acquired a savings bank and plans to turn it into a commercial bank. In the future, Woori plans to expand to Laos.

Subsidiary Woori Card will cooperate with the bank to enter the new markets by offering mobile banking services.