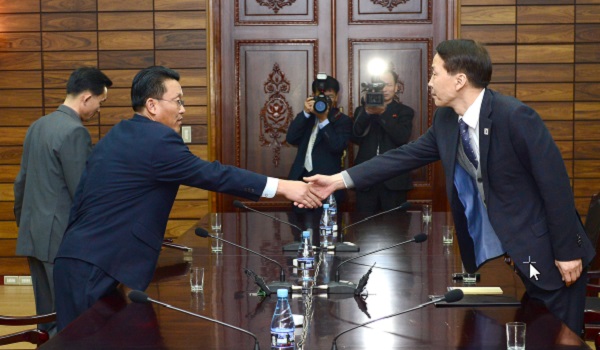 Kim Ki-woong, head of the South Korea’s delegation, right, shakes hands with his North Korean counterpart Hwang Chol, a senior official on the North’s Committee for the Peaceful Reunification of the Fatherland, before the start of working-level talks at the border village of Panmunjom Thursday. [UNIFICATION MINISTRY]

South and North Korea held working-level talks Thursday at the truce village of Panmunjom to discuss holding a higher-level meeting as part of efforts to follow through on joint agreements reached in August.

Three officials from each side sat face-to-face and began negotiations at 12:50 p.m. to determine when and where more senior-level talks would take place as well as who would lead the delegations.

The negotiations were still ongoing as of press time.

Kim Ki-woong, head of the Unification Ministry’s special office for inter-Korean talks, led Seoul’s delegation while the North’s was led by Hwang Chol, a senior official on the Committee for the Peaceful Reunification of the Fatherland.

An official at the Unification Ministry, who asked for anonymity, said the two sides were reviewing differences in details of the proposed senior-level talks.

Should the two agree on the location, timing and participants of the senior-level dialogue ? which is likely to be ministerial level ? the talks may be held by the end of this year. Seoul is likely to want Kim Yang-gon, the North’s top man in charge of inter-Korean relations, to come to the table to face Seoul’s Unification Minister Hong Yong-pyo.

For Seoul, one of the most urgent issues to be discussed is the resumption of reunions of families separated by the 1950-53 Korean War.

South Korea has insisted on the need to hold regular reunions as most surviving relatives are in their 80s and older.

The North is more keen to have the South restart tours to Mount Kumgang, which was a cash cow for its regime until the tours were halted in July 2008 when a South Korean tourist was fatally shot by a North Korean soldier.

The working-level talks were part of efforts to deliver on a joint Aug. 25 agreement that called for holding reunions and improving inter-Korean ties through bolstering exchanges. The August agreement eased rising tensions on the peninsula that brought the two Koreas to the brink of an armed conflict along the heavily fortified border.